Northeast Academy’s tennis team has been extremely competitive during the 2020 season, but has suffered multiple razor-close losses.

Two more of those setbacks occurred this week as the Eagles dropped matches to Lawrence Academy and Ridgecroft School, both by 5-4 margins.

Top-seeded Jessie Martin continued her outstanding senior season by winning both of her matches this week. She slugged her way past Lawrence’ Emma Cobb (8-4 in a single pro match) and then battled rising star Belle Turner of Ridgecroft, winning by scores of 6-1, 1-6, 10-1. 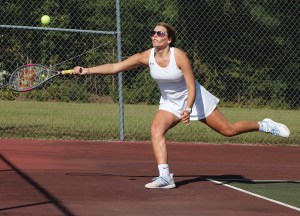 Against Lawrence, Northeast seized a 3-0 lead in singles play as #2 Emalee Jones (6-2, 6-1 over Isabella Spruill) and #3 Lizzie Smith (a default victory vs. Perris Clayton) won their individual matches along with Martin’s victory.

Martin and Smith paired up to post an 8-4 win over Cobb/Spruill in the #1 doubles match.

In the match against Ridgecroft, Northeast claimed two wins in singles action and two more in doubles play.

Both clubs will now move into next week’s TIC Tennis Tournament.