COLERAIN – Curtis Stallings Eure, 81, of 2907 Highway 45 South, went peacefully to be with his Lord on Wednesday, October 7, 2020, from Vidant Medical Center in Greenville.

Mr. Eure was born in Hertford County on November 13, 1938, and was the son of the late Judson A. and Nettie Elizabeth Stallings Eure. Retired from North State Provision Company after 46 years of employment, his career with the company spanned work in sales, as general manager, and lastly as President. 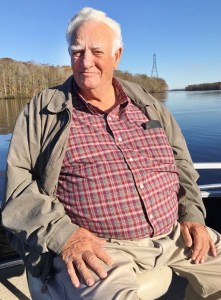 A faithful man who loved his church and family, he was a member and deacon of Christian Harbor Baptist Church. A Past District Deputy Grand Master of North Carolina’s 5th District of Masonic Lodges, he held dual memberships in both the Winton #723 and Wiccacon #240 Lodges. Other areas of involvement of which he was proud included his time of service in the United States Army.

Curtis loved all things outdoors, whether it was hunting with buddies at Chinquapin, or fishing on the Chowan with his nephew Punk Eure. He also loved simply sitting in his yard and enjoying God’s creatures. From his cats, to the finches and cardinals, the deer, bear, and turkeys, he watched for them daily and had named each and every one.

In addition to his parents, he was preceded in death in 2018 by his wife of 53 years, Betty Lou Hassell Eure; his sister, Marian Bracy; and by his brothers, Jay, Ray, and Jud Eure.

A graveside service will be held Thursday, October 15, 2020 at 2 p.m. in the Harrellsville Cemetery and will be conducted by Pastors Joe Futrell and Ricky Barnes. Due to the Covid-19 Pandemic, no formal visitation is planned, however the family will greet friends at the gravesite immediately following the service, or at his residence on both Sunday and Wednesday evenings beginning at 4:00 p.m. Social distancing and masks are suggested.

Memorial contributions may be made to Christian Harbor Baptist Church, in care of Sheila Stallings, P.O. Box 326, Harrellsville, NC 27942.