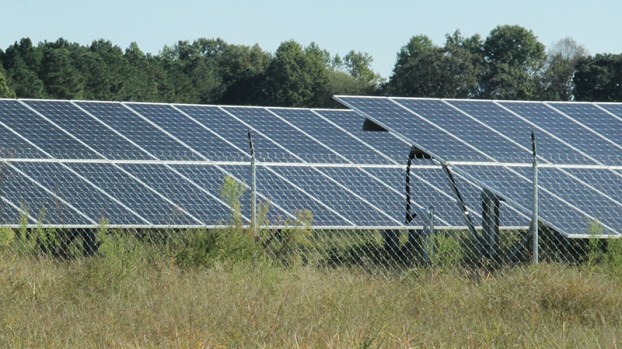 Among the latest solar farms to open in Hertford County is shown above, located along Underwood Road near Mapleton. Another solar farm is in the planning stages for construction on East Woodrow School Road, located between NC 11 and Tom Browne Road, south of Murfreesboro. Staff Photo by Cal Bryant

WINTON – Hertford County will enact a temporary moratorium on future development of solar farms or solar collectors in the county.

“This does stop it until the moratorium has ended while we get information concerning the parameters of building solar farms, etc.,” Gatling added. “The moratorium sits in place, giving the county manager and other officials the opportunity to look at this.”

Commissioner Leroy Douglas made the motion to approve the moratorium, which was seconded by Commissioner Andre Lassiter.

An official document will be drawn-up by Charles “Chuck” Revelle of the Revelle & Lee Law Firm, legal counsel for the county commissioners. The board can formally adopt that document as early as their next scheduled meeting on Oct. 19.

The issue to consider a temporary moratorium came about on the heels of a petition, bearing 62 names – the majority listing Murfreesboro area addresses, presented to the county late last month. That petition stated, “We, the citizens of Hertford County, NC, petition the county to block the installation of proposed industrial use solar power farms by E.R. Evans.”

At a scheduled public hearing about the issue on Monday, Ronald L. Storey identified the location of one planned solar farm on land owned by Evans along East Woodrow School Road. Storey told the commissioners that the farmland, owned by Evans, adjacent to his home is under contract with a solar energy company.

“I have lived beside this farm for 60 years and the surrounding 300+ acres has been in my family for over 125 years,” Storey said, reading from a letter he sent to the county on Sept. 21. “I take pride in living in a rural community where one can enjoy the sights of beautiful crops, peaceful, quiet living, and nature and wildlife surroundings. So to have an industrial type use feet from my property would destroy everything that I have enjoyed and worked for over the last 60 years. The thought of my rural property being diminished for the benefit of corporate gain is disturbing.”

Storey also expressed concern over the potential loss of property value, personally and for his neighbors.

“No one is rushing to purchase properties with a view of an 8-foot chain-link fence with barbed wire and rows upon rows of solar panels,” he stressed.

He noted that without checks and balances and better implementation of adequate buffering and screening on industrial solar farm uses, “all of the farmland in the county will eventually be a chain link barbwire metal scrap yard that only benefits the out-of-area and sometimes out-of-state corporate interest.”

Storey asked the commissioners if the county required solar companies to have remediation plan, which would return the land to farm use in the future. He also worried about the known health and safety risks with living beside a “massive” solar farm.

“One should worry about toxic solar panels, radiation, electro-magnetic fields, and what these potential issues would do to the health of the residents around the solar farm, he stated. “The possibility of our drinking water being contaminated, our lungs breathing in toxic fumes, or a lightning strike to a panel creating a massive fire are frightening and cross my mind frequently.”

In closing, Storey said he has paid in excess of $150,000 in county property taxes over the past 40-plus years.

“Why should I have to pay taxes for 30 more years if I am going to have to look at a solar farm for the rest of my days. As elected officials, I would hope that you would do everything in your power to reject this proposed solar farm in order to benefit the actual residences of Hertford County and your constituents on East Woodrow School Road,” Storey concluded.

Several other county residents sent letters to the board of commissioners, all calling for a moratorium on the construction of solar farms.

And there are those who oppose such a moratorium. David Simons of Murfreesboro, who said a solar farm is currently in operation on his property and another one is in the planning stages, briefly spoke at Monday’s public hearing, telling the commissioners he had sent them a report and encouraged them to study it before reaching a decision on a moratorium.

Two others sent letters to the board, both in opposition to a moratorium. One, William R. Sumner of Ahoskie, pointed out that solar farms represent “clean energy” and that while North Carolina ranks second in the nation in installed solar capacity, those facilities only occupy 0.2 percent of the state’s total cropland.

Sumner added that the panels used in a solar farm are typically made of tempered glass and are completely enclosed, thus providing no impact on air or water quality.

As to the remediation plan mentioned in Storey’s letter, Sumner stated that a typical land lease for a solar farm expires in 20-25 years and at the end of the lease the land can be restored to the original state.

Hertford County is currently the home to 13 solar farms, including one of the largest in the state: a 400,000 panel, 80-Megawatt facility on Joe Holloman Road off NC 11 in the vicinity of Oak Grove Baptist Church.

Combined, the county collects approximately $374,000 in tax revenue annually from the 13 solar farms.

There are current contracts/permits in place to construct three additional solar farms in the county, including one along US 158 near Murfreesboro that is 80 percent complete.

Hertford County Manager David Cotton told the R-C News-Herald on Tuesday that based on his understanding of the mechanics of a moratorium, any solar farm site that is permitted prior to a moratorium being enacted may not be impacted by the moratorium.

Maria R. Jones, an attorney for Revelle and Lee, said at the time the notice is published of the public hearing to consider a moratorium, the following projects remain insulated from the effect of the moratorium to follow: any project for which a building permit application is already outstanding, any project for which a conditional use permit or special use permit application is accepted, and a development for which substantial expenditures have already been made in good faith reliance on prior valid approval.

JACKSON – Northampton County residents with complaints or concerns about their trash collection service should soon have all the information... read more