Bynum graduated from Riverside Military Academy, Gainesville, Georgia in 1943 and he enlisted in the United States Army Air Corps Aviation Cadet Program. Bynum was called to active duty in May 1944 and was immediately shipped to Sheppard Field, Wichita Falls, TX. World War II was winding down, Bynum elected to go into radio and electronics after basic training and was sent to Truax Field outside of Madison, WI. After graduation, on to Chanute Field, Champaign Urbana, IL. Upon completion of electronics school, he was shipped to Boca Raton, Florida to attend a high altitude bombardment radar school. At this time the US Army Air Corps, Navy and other departments of defense were in the process of conducting an atomic bomb test on the Island of Bikini in the Marshall Islands. Bynum was assigned to this project and was sent to the Island of Kwajalein where B-29s were training to explode the atomic bomb on the Island of Bikini. Bynum later transferred to the Island of Enitowik and helped program a group of pilotless B-17s that were going, without a crew, fly through the atomic cloud that was created when the bomb exploded. These Drone B-17s were equipped with high tech electronics and TV views of the drones’ cockpit being displayed on the Mother planes. 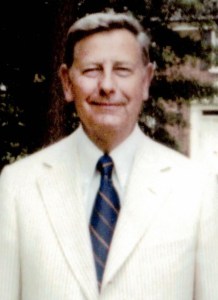 Bynum returned home and attended the University of North Carolina, Chapel Hill. He was a member of the German Club, Pi Kappa Alpha fraternity, the Men’s Honor Council, the 13 Club, the Society of 1789, and other social organizations. Upon graduation he had planned to go to law school but as a member of the reserve was immediately called back to active duty during the Korean Conflict. He was assigned as an adjutant to a troop carrier squadron located at Donaldson Air Force Base, Greenville, SC, headquarters 18th Air Force. Bynum accompanied his squadron to Grenier Air Force Base, Manchester, NH for ten weeks in the winter of 1952. Here they joined other units for joint maneuvers which included dropping paratroopers and supplies from C-119 aircrafts. These exercises were conducted in upstate New York, preparing for Korea. Bynum enjoyed his time in the military. He was awarded the American Theater Ribbon, Victory Medal and Good Conduct Medal.

Bynum returned to his beloved Murfreesboro in late summer of 1953 and opened the Bynum R. Brown Agency, Inc., an independent insurance agency (1954-1991.) The next big and by far the greatest thing that ever happened to him was marrying Shirley Graham on July 30, 1955 and having his daughter, Grace Graham Brown, born on May 24, 1961.

Bynum and Jim Johnson started Roanoke Valley Nursing Home in 1961 in Rich Square, NC which was sold in 2007. His business interests also included Real Estate, Farming, Health Care, and Appraising. Bynum was active in political, business and the social life of Murfreesboro and Hertford County. Bynum served as a Murfreesboro Town Councilman, Hertford County Commissioner, longtime Chairman of the Murfreesboro Planning Board, President of the Chamber of Commerce, President of the Rotary Club, Chairman of the Hertford County Educational Foundation, was a founding member of Ebo, and President of the Coral Bay Club (1993-1995), Atlantic Beach, NC. Bynum had served as a Building Committee Chairman, Deacon, Clerk and Trustee of Murfreesboro Baptist Church. Bynum was a founder in 1957 of the Murfreesboro Coffee Club, a social organization that promotes town values and meets daily for coffee to discuss town matters.

Bynum served faithfully as a member of the Southern Bank General Board of Directors for 30 years and when he retired in January 2016 was named Director Emeritus. Bynum was a Mason and Shriner for over 50 years and a member of the American Legion and Veteran of Foreign Wars.

Bynum developed an interest in genealogy and joined the Bolling Family Associates where he became a Director. His direct lineage to Robert Bolling led him to joining many hereditary societies: Jamestown Society, National Society of Magna Charta Dames and Barons, The Plantagenet Society, Colonial Order of the Crown (Charlemagne), Order of the Merovingian Dynasty, all of which he was very proud.

Bynum, the son of Bynum Henry Brown (August 1890 – October 1971) and Grace Pearce Brown (May 5, 1897 – June 4, 1985) is survived by his daughter and only child, Grace Graham Brown of Palm Beach, FL; his sister, Grace Clements Brown Boone of Raleigh, NC; along with numerous nieces, nephews and extended family. He is pre-deceased by his devoted and loving wife of 63 years, Shirley Graham Brown, and his sister, Jane Vaughan Brown Prichard of Henderson, NC.

Bynum lived a well-rounded life and believed firmly that family, duty, responsibility and fun should be a part of life.