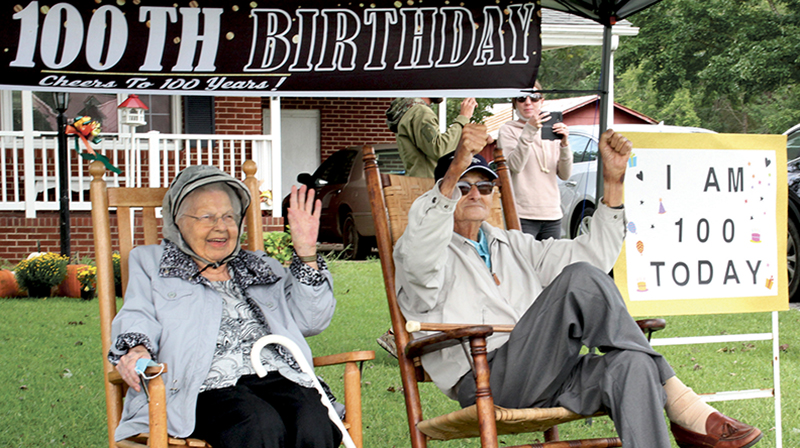 Cecil Taylor and his wife Lillian wave to passing motorists that took part in Saturday’s event to celebrate his 100th birthday. Staff Photo by Cal Bryant

EURE – Traffic was heavy on Saturday along Corner High Road from Eure to US 13 as vehicles of all shapes and sizes passed by the home of Cecil Taylor in recognition of his 100th birthday.

Taylor, along with his wife of 76 years, Lillian, sat under a tent and waved to the parade of vehicles.

The Gates County native served in the U.S. Army during World War II and survived the Dec. 7, 1941 attack on Pearl Harbor. It was there, he jokingly said in an earlier interview, where he could have won a gold medal in the 100 yard dash as he successful dodged the bullets fired at he and his comrades by Japanese aircraft.

Taylor went on to see additional combat action in Italy, where he would survive yellow jaundice, and then malaria, as well as enemy fire.

Back at home, Taylor is credited with helping to start Hall Ruritan Club, and served as a Deacon at Cool Spring Baptist Church. He also proudly represents Gates County on the North Carolina War Memorial, located at Fort Bragg in Fayetteville.

Following Saturday’s parade past his home, Taylor was taken by a Model A Ford to Hall Ruritan Club where family and friends treated him to a meal.