From chains to cheers 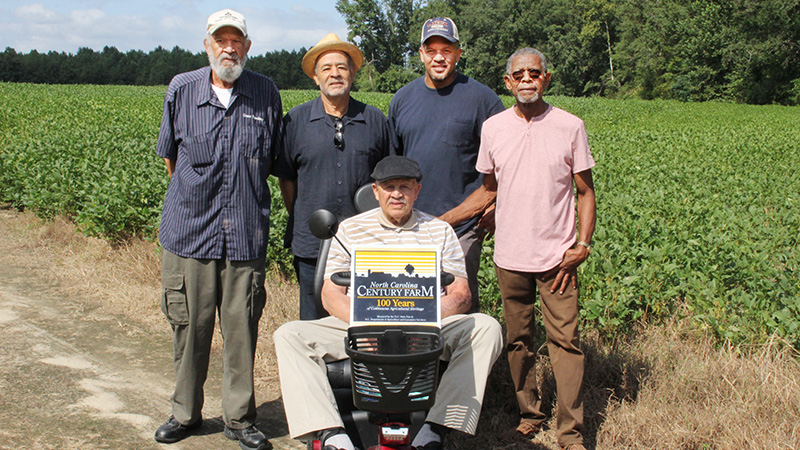 Descendants of former slaves Anderson and Augustus Grant hold a sign from the NC Department of Agriculture that designates their land in Northampton County as a Century Farm. Pictured are John Grant Sr. (seated) and, standing from left, Melvin Grant, Randolph Grant, Arthur Grant Jr. and Leonard Joyner. Not pictured is Randolph Grant Sr. Staff Photo by Cal Bryant

That designation, initiated in 1970 by the North Carolina Department of Agriculture, pays tribute to families who have maintained ownership of farmland for 100 years or more.

Two of the newest designees – Almeta Grant Farm: Almeta Grant Heirs (1907) and Augustus Grant Homeplace Farm: Gladys Grant Joyner (1907) – were notified in August of their acceptance into the Century Farm program. Their respective path to this esteemed designation wasn’t an easy task; rather, it sprang from the savage roots of slavery.

“We will proudly display these signs on our farms,” said Arthur Grant Jr., the great grandson of Augustus and Almeta Grant. “We are proud to continue the farming legacy of our ancestors.’

That legacy was born on a plantation in Northampton County, a long way from the family’s roots to the Ewe people of Ghana, Africa. Their history dates back to the 13th century.

Anderson Grant, a slave owned by William Grant and Arthur’s great great grandfather, was born somewhere around 1820 on a plantation that is now part of Odom Prison Farm near Jackson. Upon the death of his master, Anderson was given to William’s son, Newitt, and worked as a field hand on the same plantation.

Upon Newitt Grant’s death in 1846, Anderson again saw a change in his master, but this time it was a woman – Lucy Ann Grant, the daughter of Newitt. Lucy Ann married Jesse Flythe, a Methodist minister, in 1846. She moved to Lasker, carrying with her a few slaves, including Anderson.

According to a schedule published in 1860, Jesse Flythe was listed as owning 15 slaves, one of which was named Susan. She and Anderson were married and ultimately had 11 children, two of which died at birth.

They continued to live on the Flythe land, even after slavery ended in 1865.

Anderson Grant was briefly a landowner, purchasing 73 acres for $250 in 1876, but sold it the same year.

“He took the hard work he learned as a slave and used it to earn a living when he became a free man,” Arthur Grant Jr. wrote in his book, “Parting of the Waters” which was published in 2017 after years of painstaking research about his family. “We know that Anderson was very good at mending and making shoes….he continued to work as a cobbler.”

Part of Arthur’s research showed that Anderson moved his family to Boykins, VA in 1910 where he worked as a sharecropper and a cobbler. He died there in 1916.

Among the children of Anderson and Susan Grant was Augustus ‘Gus” Grant, the great grandfather of Arthur Grant Jr. He was born on the Flythe plantation in 1854. As an adult, he lived in Potecasi where he worked as a farmer, made and sold molasses, and made bricks and wooden shingles. He also invented a peanut thresher, a device used to separate the shells from the vines.

The majority of the land is situated along what is now known as Ashley’s Grove Road near its intersection with NC 35.

Gus Grant, who couldn’t read or write, built a school on his farm for the Black children of area to attend in the late 1800’s to the early 1900’s. He paid the teacher out of his own pocket.

“In my research of the land deeds, he signed his name as an X,” Arthur Jr. said.

Gus Grant died in 1941 and is buried “up on the hill” of the family farm he worked so hard to maintain and pass along to the next generation.

“He took the money and used it to buy land,” said Melvin Grant, the older brother of Arthur Grant Sr. “He taught us the value of hard work.”

“When you look at this, it’s more than just a farm to me,” said Arthur Jr. as he gazed out over row after row of soybeans. “When I look back on my family, starting with Anderson and his parents as slaves on the William Grant plantation, I feel like I come from a family of survivors. They had to endure a lot, not just physically, but mentally as well. They lived in bondage, but managed to raise a family and survive.

“When Anderson Grant purchased that land way back in 1876, he was planting a seed for other family members to later follow,” Arthur Jr. continued. “Augustus saw his father buying land, so he started buying land. My grandfather, John Luther Grant, bought land. They, along with my uncles and older cousins, showed me at an early age how to be proud of who you are.

“Even though I’m not here each and every day, I’m proud to come home to this farm,” he added. “Sometimes I’ll just park my truck there next to the cemetery and sit on the tailgate, thinking about all the sacrifices those family members made for our family. All I’m doing today is just keeping that history alive. It’s my wish that this land remains in the Grant name for centuries to come.”

His father, Arthur Sr., also learned the importance of continuing the family’s legacy.

“This family takes pride in their good name,” he said. “So many sacrificed for what we have today. They respected others and demanded respect in return. We still remain today as a tight-knit family, something that’s been handed down from generation to generation.”

And now, the current generation has two signs to hang for all the world to see….designation as a Century Farm Family.