‘Jet on a stick’ is sick 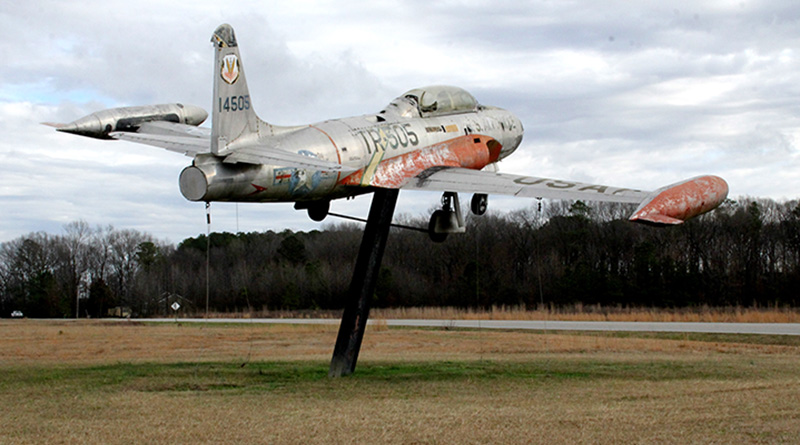 Since 1968, this Lockheed T-33A Shooting Star has been a local landmark at the entrance to Tri-County Airport. Staff Photo by Cal Bryant

AULANDER – It’s been called a “jet on a stick.”

The Lockheed T-33A Shooting Star has sat stationary atop a pedestal and served as the lone sentry at the entrance to Tri-County Airport.

The aircraft was originally donated to the town of Rich Square by former Second District U.S. House Representative L.H. Fountain of Tarboro. It was moved to the airport in 1968 through the efforts of Vernon Taylor, an original member of the Tri-County Airport Authority.

Now, 52 years later, it’s weathered and worn…and often the target of vandalism. But yet it still serves as a local landmark and draws the attention of those traveling along NC 561 between Rich Square and Ahoskie.

Bertie County Commissioner Tammy Lee is the current chairperson of the Tri-County Airport Authority. Lee and her colleagues are well aware that the aircraft is in desperate need of a major facelift. The biggest deterrent to that effort is money.

“Over the last six years that I have been on the Airport Authority we have discussed both trying to save the plane and even scrapping it,” said Lee. “Former Hertford County Commissioner Johnnie Ray Farmer, who was a member of the Airport Authority before he sadly passed away this past spring, contacted the military about it and I have contacted our state and federal legislative officials multiple times. We have spent hours attempting to get the military to rehabilitate the T-33 jet or replace it with a more modern plane to coordinate with our new modern terminal.”

Lee said she also reached out to a private contractor who had rehabilitated a plane at small airport in North Carolina.

“The quote we received was a little over $40,000. The Tri-County Airport Authority cannot spend that amount of money.”

She said that led the Authority to discuss scrapping the T-33 and place a sign at the road.

“Johnnie Farmer really did not want that to happen,” Lee stressed. “The plane has been in place for many years and has become a local landmark. The Authority wants this plane to represent our new airport terminal and the three counties it represents. We want something the citizens in the three counties can be proud of and I’m sad to say the current condition of the T-33 is not something to be proud of.”

Lee said there was an effort years ago by the local Jaycees organization to restore the plane.

“This plane was Johnnie Farmer’s special project and I’m so disappointed we could not get this project done before his passing,” Lee said. “The Authority has not discussed plans at any recent meetings, but it is my hope that someone reading this article will be moved to help us with restoring the T-33. If you would like to help or know of someone we can contact, please contact the airport (252-345-0111) or any of the Authority members.”

If you would like to see drone footage showing the condition of the plane, visit Youtube and search T-33 at Tri-County Airport.

The Lockheed T-33 Shooting Star (or T-Bird) is a subsonic American jet trainer. It was produced by Lockheed and made its first flight in 1948.

Used by the Navy and the Air Force, the latter military branch began phasing the T-33 out of front-line pilot training duties in the Air Training Command in the early 1960s.