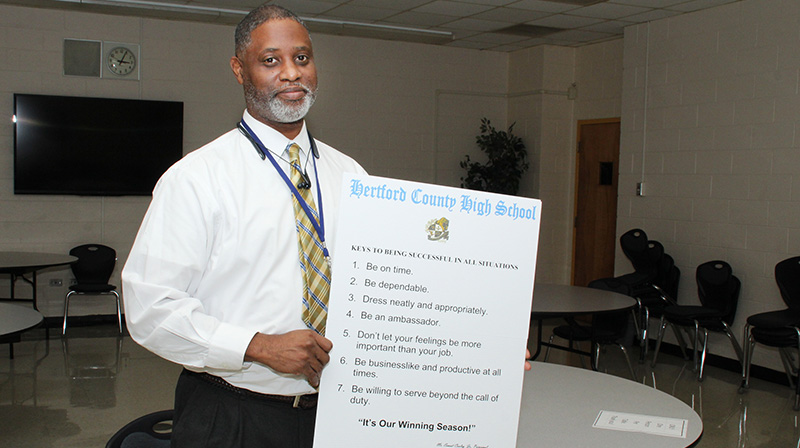 Ernest Cooley has been selected as the Hertford County Public Schools Principal of the Year. Staff Photo by Cal Bryant

Despite the effects of a global pandemic, Hertford County Public Schools still carries forth its obligation to educate tomorrow’s leaders. 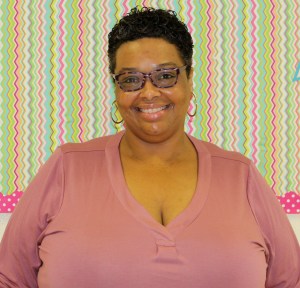 Winborne admitted that she wasn’t the “biggest reader” when she was a student, but she loves to check out plenty of new books now. In fact, the Riverview Elementary Media Coordinator admits she never expected to end up working with the school system at all.

Winborne, who just started her seventh year at the elementary school in Murfreesboro, said she was very surprised by her selection as the district’s Media Coordinator of the Year , and almost didn’t believe it at first.

“But I’m excited that my peers chose me. I’m excited and thankful for it,” she explained.

As the person in charge of the library, Winborne takes care of more than just checking out books. She teaches media skills to students, helps troubleshooting technology, collaborates with teachers on projects, coordinates the Accelerated Reader program, and supervises the Battle of the Books team.

“It doesn’t have to be a quiet library,” she said about her philosophy.

Things have been quieter, however, with students not on campus right now because of the pandemic. But Winborne has adjusted to communicating more through tools like Google Classroom, something she had already utilized beforehand.

Winborne is a graduate of Hertford County Schools and completed her undergraduate degree in Business Administration at Elizabeth City State University. But she took a job 15 years ago as a media assistant at Hertford County Middle School which set her on the path she’s on now. She enjoyed the work and was encouraged to pursue it further.

Now the kids give her their own book recommendations.

“I really enjoy when kids get excited about getting a new book or seeing new books. And after they read it, they come tell me about it, and you can just see the excitement on their faces,” she said.

Meanwhile, Fleetwood, also said she loves watching her students as their faces light up when they learn something new. And like Winborne, she never expected her career path to take her back to school. 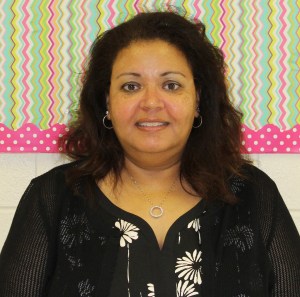 Candy Fleetwood was chosen as the Teacher of the Year in Hertford County Public Schools for 2020-21. Staff Photo by Holly Taylor

This is Fleetwood’s 29th year at Riverview Elementary. During those years, she’s served as a reading coach and briefly as a first grade teacher, but the majority of her time has been as a kindergarten teacher.

Fleetwood was raised by her paternal grandparents, George and Agnes Hall. Her grandmother served as the principal at Ahoskie Graded School at the time, and Fleetwood decided early on that “the one thing I’m not going to be is a teacher.”

But when she returned home from East Carolina University, she ended up spending some time as a substitute teacher and discovered that she actually enjoyed the work. After that, she worked as a teacher assistant while getting her teaching degree from Elizabeth City State University. Then she was hired to work at Riverview and has been there ever since.

“I love working with the students. At that particular age, they’re like sponges,” she explained.

Having the school year disrupted because of the pandemic, she admitted, has been tough.

“It’s been a learning experience for me,” Fleetwood said about having to adjust her teaching style. “I really miss having them here with us, but I know for safety reasons, that’s not possible.”

Fleetwood is married and has two sons of her own. Throughout her years of teaching, Fleetwood has relied on advice from her grandmother: “when you go in that classroom, you need to think of those children as your own.”

That kind and compassionate teaching style contributed to her selection as Teacher of the Year.

“I was very excited and stunned,” she said when she received the news. “I feel that after so many years of hard work and doing my job, I feel like it has paid off. I’m happy and I’m honored.”

Like the two other honorees, Cooley said that the role of an educator wasn’t his first career choice.

“I didn’t intend to come to Hertford County,” said the Raleigh native who majored in Business in college. “I came here because my wife (Delina, now a Physician’s Assistant at Aulander Medical Practice), who is a native of DC, came here….part of her college education was to work in public health in a rural area. She chose Rich Square for that and we’ve made Ahoskie our home now for 30 years.”

Weighing his available career options, he put in an application with Hertford County Schools and landed a job as a student counselor at the middle school. That was in September of 1991….just a few months removed from his hitch in the U.S. Navy as a part of Operation Desert Storm.

“I can look back now and see how being involved with those young men back in the 90’s helped prepare me for the role of a principal today,” Cooley said. “I did more than just coach basketball; I taught life skills as well, something I still do today.”

He observed the biggest difference he sees today in high school age students is their mentality.

“They live in the country, but they act like they’re from a big city,” Cooley noted. “Plus, so many of them are the mama and daddy in their household, responsible for looking after their younger siblings. When they transition from home to school, they have to reverse that role and become a teenager. You have to earn their trust and allow them to let their guard down so you can get through to them.”

Despite all the challenges he faces on a day-to-day basis, Cooley said he wouldn’t trade his job for any other career.

“You just don’t end up in Ahoskie unless you’re from here. God shaped me for this job and God brought me to this place for a reason,” he stressed.

And once he arrived, in his words, “time sure flies when you’re having fun.’

“Things have moved so fast in my career,” Cooley noted. “God is still moving me, even though my roots are buried in Ahoskie.”

He did “move” without changing his home address. Prior to becoming the HCHS Principal, Cooley spent time as a teacher and coach for six years at C.G. White Middle School in Powellsville and later in Camden County as an assistant principal, then promoted to principal at the middle school.

“When you step outside our district, you get to see things from a different perspective, and learn how to do things in a different way. You put that in your tool box to use later in your career,” Cooley remarked.

While at Camden Middle School, Cooley was twice named as the county’s Principal of the Year (2013 and 2015).

As for now earning that honor in Hertford County, Cooley remarked, “This honor isn’t about me; it’s about us here at Hertford County High School. The staff here makes my job so much easier; they do all the heavy lifting, my job is to keep us moving forward in an effort to meet our academic goals. This honor is theirs more than mine.”

Cooley also thanked his boss – HCPS Superintendent Dr. William Wright – for giving him the opportunity three years ago to lead the high school.

Dr. Wright offered his thoughts on the three honorees.

“A trip to Riverview Elementary’s Media Center finds a well-coordinated environment that is inviting and prepared for student and staff learning,” he said. ‘More and more Media Centers serve to enhance learning in increasingly innovative ways and Ms. Winborne and the work she does at RES stand at the forefront of that innovation.

“Mrs. Fleetwood embodies the perfect disposition for a teacher with her nurturing, professional spirit,” Dr. Wright continued. “An encounter with her immediately leaves anyone with the reassurance that you would certainly want your child in her classroom.

“When I had an opening at HCHS and learned that Mr. Cooley had interest in the position, I took a trip to the school in which he was employed at the time to see him in action. Just as he is now, he displayed himself as a no-nonsense leader who is passionate about outcomes for students,” Dr. Wright noted.

The Superintendent added that he wished the trio good luck as they now advance to the Regional level of recognition.