WINTON – Dr. William T. Wright Jr. readily admits that his first career choice wasn’t in the field of education. But now that’s his chosen path, he has made the most of the situation. 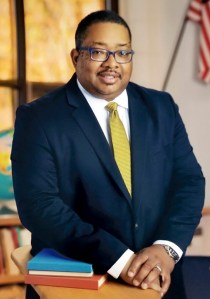 Dr. William T. Wright Jr. is the 2020-21 Superintendent of the Year for the state’s northeastern region. Contributed Photo

“My name was put up for nomination by one of my colleagues and seconded, and that was that,” said Wright.

“I guess someone thought I was doing a pretty good job,” Wright said humbly, adding it is, “hard to talk about myself.

“We’re a pretty tight group of superintendents here in our part of the state, one that has become better acquainted now more than ever as we meet more frequently than in the past to share ideas of how to deal with all that’s going on due to the COVID-19 situation,” Wright said. “All of us face similar challenges.”

Wright said he was honored to be chosen for the award.

“It’s a testament to the hard work we’ve been able to accomplish here in just five years in Hertford County,” he stressed. “I see this as a way to showcase what’s going on here within Hertford County Public Schools, particularly to those outside of our district. We have worked collectively as a team to really move this district forward.”

“I’m not a sit-in-the-office guy; I like to get out in our schools and meet our challenges face-to-face,” he said. “That keeps my hand on the pulse of what is needed here.”

Dec. 1, 2020 will mark Wright’s fifth year in Hertford County. Based on the turnover of superintendents in the northeast region of the state, he has become one of the “tenured” educational leaders.

“I’ve seen my role shift as just one of the region’s superintendents to now being a mentor or an information resource,” Wright remarked. “They’ll bounce things off me…that’s kind’a cool.”

Wright stressed that he’s been blessed to work with great teachers, administrators, support staff, and local board of education in Hertford County.

“None of what we’ve accomplished here in Hertford County is possible without a great team, and I’m so blessed to have great teammates,” Wright stated. “These are some of the best people I’ve ever worked with.

“I serve five bosses – the members of our school board,” Wright added. “Fortunately, in my case, three of my bosses are educators and two have sat in the superintendent’s seat. They know what it’s like, they understand the challenges of this position.”

Wright said the regional Superintendent of the Year award is, “not about me, but rather about we. I admire the collective work of everyone associated with our school district, to include our community and corporate sponsors.”

The northeast region is one of eight statewide. The names of the eight Superintendents of the Year will be considered for the statewide honor, which will be selected later this year.

“Actually, what happens is the national organization – the American Association of School Administrators – will select a number of us, from the eight total, for an interview as a finalist for State Superintendent of the Year,” Wright said, explaining the next steps in the process. “A committee of retired educators and school board members / administrators from the state level will select the overall winner. We’ll see what happens.”

Dr. Wright is a 1983 graduate of Northern Nash High School in Rocky Mount and, at the time of his graduation, was the youngest graduate in the school’s history at 16 years of age.

He was a broadcaster and manufacturing manager before becoming a teacher at Edwards Junior High School in Rocky Mount.

He later became principal of Western Harnett High School in Lillington before being named assistant superintendent for auxiliary services for Harnett County Schools in 2011.

He was named superintendent for McCormick County, SC in 2013, the position he held prior to being hired as Hertford County’s Superintendent in October of 2015.

He is married to Mary Barnes Wright and is the father of two adult sons: William III (Trey) and Mariam “Deonte”.

RALEIGH – Governor Roy Cooper announced Sept. 1 that after a summer of hard work to slow the spread of... read more