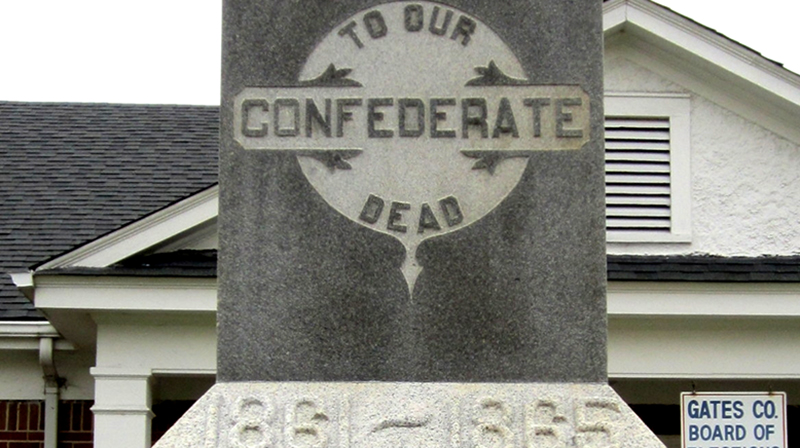 Erected in 1915, the future of the Confederate monument in downtown Gatesville will be discussed next month by the county commissioners after they hear a report from an ad hoc committee. Photo by Bernard Fisher

GATESVILLE – Will it stand….will it go?

The future of the Confederate monument located on county property in downtown Gatesville will be addressed by the Gates County Board of Commissioners at their regularly scheduled meeting next month.

The board’s only reference to what the future may hold was heard at their regular meeting on Aug. 19. There, board chairman Ray Freeman stated that discussions have been ongoing between the commissioners and the county attorney about the monument.

“We will be seeking the advice of others,” Freeman stated at last week’s board meeting.

In a brief statement, Freeman said, “the Gates County Board of Commissioners have agreed to appoint an ad hoc committee to thoroughly research issues surrounding the future of the Confederate monument in Gatesville. The committee will report to the board of commissioners at the next regularly scheduled meeting in September.”

Monuments/statues promoting the Confederate cause during the Civil War have been the recent subject of a national movement to remove such memorials based upon their alleged link to the disenfranchisement and alienation of African Americans.

That movement gained momentum in the wake of the May 25, 2020 death of George Floyd, a Black man, at the hands of several white officers with the Minneapolis, Minnesota Police Department. One of those officers was charged with second-degree murder while three others were arrested for aiding and abetting second-degree murder.

In numerous cases across southern states, protests over the removal of Confederate statues/monuments have taken a violent turn, some causing injury to citizens and law enforcement officers.

While no such protests have occurred locally in the Roanoke-Chowan area, the Hertford County Board of Commissioners voted last week to remove the Confederate monument in front of the old county courthouse in Winton.

In late June, the Northampton County Board of Commissioners voted unanimously to remove all the portraits that adorned the walls inside the courtroom, to include the English nobleman for whom the county was named in 1741.

A public statement released after the decision noted that “while the Board acknowledges the historical significance of the portraits, it believes they do not appropriately reflect and honor the current diversity of Northampton’s citizens and judiciary.”

Board Chair Charles Tyner told the News Herald in a brief interview that some of the subjects of those portraits were supportive of slavery. He also pointed out that there were no Black or minority portraits hanging in the courtroom.

“We wanted to make sure that we understand that courthouse is for all people, and we cannot dwell on the past,” he said.

As for the Confederate monument in Gatesville, located on the grounds of the Cooperative Extension Office, it was unveiled and dedicated on July 8, 1915. It memorializes Gates County’s Confederate veterans, in particular William P. Roberts, a county native and youngest General in the Confederate Army, commissioned at the age of 23.

According to information found online at www.docsouth.unc.edu, U.S. Representative Claude Kitchen was the featured speaker at the monument’s dedication ceremony. Mrs. R.E. Little, president of NC United Daughters of the Confederacy also spoke. The monument was unveiled by four young girls before a crowd of 2,000 people.