Confederate statue in Winton will be removed 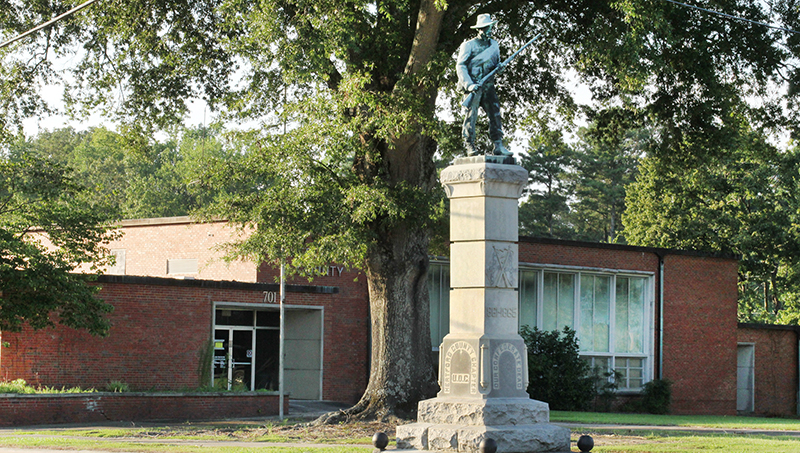 The Confederate monument on the grounds of the old Hertford County Courthouse in Winton is scheduled to be removed Aug. 19 after the county’s board of commissioners approved the measure at their Monday night meeting. Staff Photo by Cal Bryant

WINTON – He has stood his ground for nearly 107 years, keeping watch over North King Street in downtown Winton.

On Wednesday, Aug. 19, the solidary Confederate solider and the 13-foot monument on which he is perched on the grounds of the old Hertford County Courthouse will become part of a national movement to remove such memorials based upon their alleged link to the disenfranchisement and alienation of African Americans.

That movement has gained momentum in the wake of the May 25, 2020 death of George Floyd, a Black man, at the hands of several white officers with the Minneapolis, Minnesota Police Department. One of those officers was charged with second-degree murder while three others were arrested for aiding and abetting second-degree murder.

In numerous cases across southern states, protests over the removal of Confederate statues/monuments have taken a violent turn, some causing injury to citizens and law enforcement officers. Hertford County Sheriff Dexter Hayes said those types of protests were a major cause of local concern.

“We have investigated these threats and come to the conclusion that we needed to do what is within our power to keep these protests from happening, thus preventing the interruption of business in the county offices nearby and to also protect the safety of the general public just in case a protest turned violent,” Hayes continued.

Hayes mentioned protests over such monuments in other areas of the nation.

“Some started and ended quietly, but there were those that turned violent; we wanted to make sure the latter does not happen here in our county,” Hayes stressed.

He later added that the county commissioners have also received similar phone calls regarding planned protests of the Winton monument.

“This monument, based on the safety of our citizens and county employees working nearby, is being recommended for removal,” Hayes stated.

Prior to taking the recommendation under consideration for a motion and vote, County Manager David Cotton informed the commissioners that a company had been contacted regarding the possible removal of the statue/monument.

“If you approve this measure tonight (Monday), they said they can be here on Wednesday morning,” Cotton said.

County Attorney Charles “Chuck” Revelle suggested that if a motion was made, it needed to reflect that the findings of the board about the monument is that it, “posed a threat to public safety based on the comments of the Sheriff.”

John Horton, Vice-Chairman of the Board, wanted to also add to the motion that once the monument is removed, it will be stored, “in our care until we decide later what to do with it.”

Horton made the motion, to include his and Revelle’s additions, for the removal of the statue. It was approved without objection.

Cotton later told the R-C News-Herald that the cost for removal would be $4,200. That money will come from the Public Buildings Maintenance Department Contracted Services budget.

According to information found at www.docsouth.unc.edu, the cornerstone for the monument was laid by the Masonic Lodge on Aug. 23, 1910. The entire cost was listed at $2,500 (with $1,000 coming from the state legislature) for the bronze statue, granite shaft and base, accompanied by four cannon balls on the bottom tier of the monument.

The full-length Confederate soldier standing on the top tier is depicted walking while holding a Springfield rifle in a combat-ready position.

The monument was unveiled and dedicated on Sept. 25, 1913 by the Hertford County Chapter of the United Daughters of the Confederacy. The orator for the occasion was then North Carolina Attorney General T.W. Bickett, who was later elected as Governor.

Etched writing on the monument signifies it was erected to honor “Our Confederate Dead.” Above that is etched: 1861-1865.