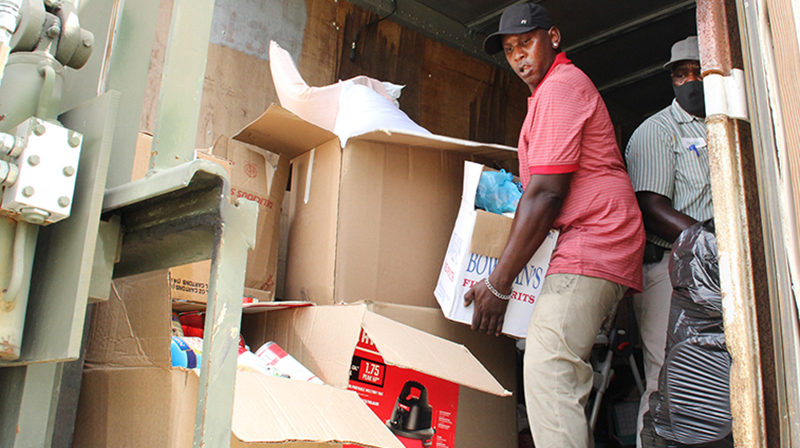 Antonio Dunn loads boxes packed full of storm relief items from his 18-wheeler onto a forklift at the donation center near Windsor. Staff Photo by Cal Bryant

WINDSOR – Donations have been pouring in since an EF-3 tornado, spawned from Hurricane Isaias, leveled multiple homes in the Cedar Landing community near Windsor last week. Plenty of those donations have come from Bertie County residents, but people in neighboring counties have decided to help as well.

Antonio Dunn, owner of Papa Joe’s trucking company in Northampton County, was one of those people who felt the need to reach across county lines.

“We knew a whole neighborhood had been wiped out. They lost everything,” Dunn explained.

People spread the word and, soon enough, the trailer was completely packed with a variety of goods storm victims would need while they get back on their feet. The truckload donation included toilet paper, diapers, shoes, dry foods, canned foods, water, microwaves, curling irons and other hair products, baby cribs, pillows, and much more.

“We even had Polygrip for their teeth,” Dunn exclaimed.

He made the delivery on Aug. 12 to the donation center at Bertie Early College High School.

“That truckload stocked the whole gymnasium up,” he continued, noting that he still had more items to bring which hadn’t fit in the first load.

Dunn said the stories of the people who lost everything in a matter of minutes brought tears to his eyes. They certainly haven’t had a lot to smile about lately, but he was glad to see some smiles on their faces as they came to the center to receive some of the donated items.

The collaborative effort to collect the donations was a “blessing,” he said.

“I didn’t do it for publicity,” Dunn continued. “I just wanted to show people what we could do as a community if we just stick together. I wanted Bertie to know their neighboring county was with them in this fight.”

Dunn pointed out that Northampton County’s history shows it was originally a part of Bertie County, meaning the two have been connected for a long time and will continue to be in the future.

Dunn said he’d be happy to use his trucks and trailers in any way to continue to provide assistance.

“That’s how I can help. That’s what I can do,” he concluded.

Donations for storm victims are still being accepted at the Bertie Early College High School gym, located at 819 Governors Road, Windsor, from 10 a.m. to 3 p.m. Monday through Friday. They are unable to accept more clothing and shoes at this time, but are still in need of items such as bedding linens, bath and kitchen linens, school supplies, cleaning supplies, phone chargers, first aid items, and non-perishable foods.

Volunteers are needed at the donation center to help unload donations, unpack boxes, and sort through items.

Over 200 homes throughout Bertie County received damage from Hurricane Isaias. Other than the 26 homes which took a direct hit from the tornado, 95 have been deemed unlivable.

From Georgia, with love