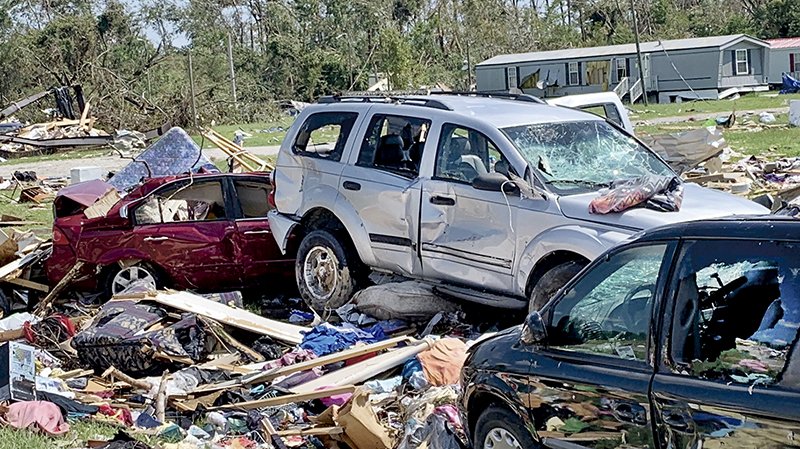 Damaged vehicles are among the rubble within a mobile home park on Morning Road in Bertie County where an EF 3 tornado touched down as part of Hurricane Isaias on the morning of Aug. 4. The twister was among 15 reported by the National Weather Service-Wakefield in North Carolina, Virginia and Maryland. Photo by Baptist on a Mission

Following several days of investigation, the National Weather Service (NWS) office in Wakefield, VA has concluded that at least 15 tornadoes were spawned across the region one week ago as part of Hurricane Isaias.

Three of those twisters occurred in the Roanoke-Chowan area, including one that claimed two lives in Bertie County.

The other two impacted different sections of Hertford County.

“We have completed all damage surveys for now, but know there could be an additional tornado or two out there,” Orrock noted. “We feel we have been able to go into all areas of reported tornado damage as well as interrogate those areas where a tornadic debris signatures were evident on radar. Thanks to all the emergency services partners who aided in damage reports and provided access to restricted areas.”

As of now the total number of tornadoes in the NOAA/NWS Wakefield region area is 15. All are within northeastern North Carolina, central and southeastern Virginia, and the Maryland Eastern Shore.

Those twisters (listed by strength) are as follows:

EF3: one in Bertie County;

Following is a breakdown of the three tornadoes in the Roanoke-Chowan area:

Summary: The tornado touched down near the intersection of Knowles Lane and Middle Track Road. It then tracked to the north northwest and reached its strongest point just south of Woodard as it crossed Morning Road, where its width increased to just over one third of a mile and it reached EF3 intensity.

The tornado completely destroyed several mobile homes and stick built houses in this area. It flattened seven single-wide and double-wide mobile homes, leaving unrecognizable bits of debris. The fatalities and injuries occurred in the vicinity of Morning Road.

The tornado weakened to EF1 intensity as it approached the west side of the town of Windsor, but it did damage a farm on Highway 308.

The tornado then lifted just before reaching Governors Road about two miles northwest of Windsor.

Summary: A weak tornado impacted a small area from Indian Creek to Panther Swamp, just to the east of Indian Branch Road in Panther Swamp area, south of Murfreesboro. The tornado mainly caused damage to trees and lifted before reaching Parker Road.

Summary: A weak EF-0 tornado tracked just to the east of Como, forming near Mill Neck Road and tracking north-northwest as it crossed US 258 just south of Battles Beach Road before ending just north of the state line along Sandy Ridge Road in Virginia. The tornado snapped limbs and downed a few trees.

Orrock said it appeared that all of the tornadoes in the region were spawned from one strong rain band embedded within the hurricane.

The NOAA/NWS Wakefield data showed that as Isaias tracked to the north-northeast through the area early morning hours of Aug. 4, a north-south oriented surface boundary set up on the north side of the storm (just to the east of I-95). On the east side of the boundary, winds were mainly out of the southeast with temperatures in the upper 70s-around 80F and surface dew points in the mid to upper 70s. To the west of the boundary, winds were generally out of the north with temperatures and dew points in the upper 60s-around 70F.

As is typical with tropical storms, the boundary layer wind fields were extremely strong. In addition, there was impressive deep-layer shear owing to the presence of the strong upper jet on the east side of the trough. When one of the outer rain bands of Isaias (already containing mini supercells) moved into the unstable/extremely sheared airmass just to the east of the boundary, this resulted in several tornadoes. The tornado reports were generally clustered in a SSW-NNE direction in an area within 75 miles of the location of the boundary in the northeast quadrant of Isaias.

“This one rain band was responsible for nearly all of the tornadoes,” Orrock said.