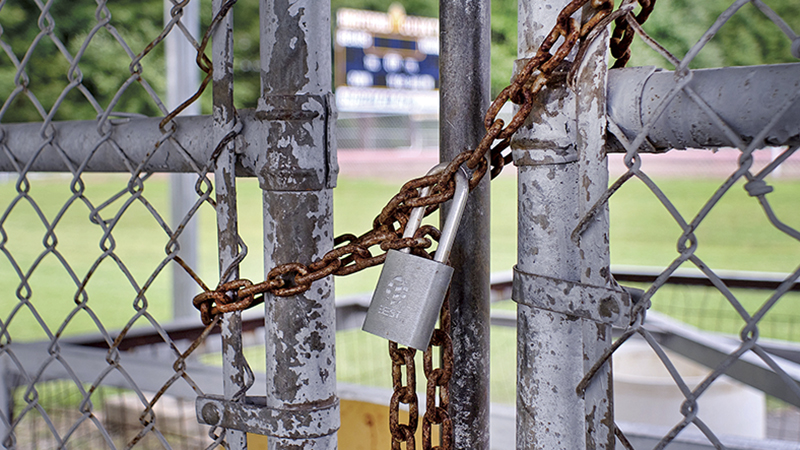 One of the gates leading into Bears Stadium at Hertford County High School remains padlocked as the start of the 2020-21 sports season is delayed due to the COVID-19 pandemic. A.A. Imaging / Andre Alfred

With the state at a standstill regarding decisions to a COVID-19 reopening plan, the possible start of the 2000-21 high school sports season has been placed on hold once again.

At his press conference on Aug. 5, Governor Roy Cooper and his health team extended Phase Two of the state’s reopening plan until at least Sept. 11. Unfortunately, this announcement means that the start of sports for the 2020-2021 school year will be delayed beyond Sept. 1 for North Carolina High School Athletic Association (NCHSAA) member schools.

According to the NCHSAA, their staff and Board of Directors will review all available options, to include seeking input from other partnering agencies, and announce a calendar for playing sports during the upcoming school year.

It is hoped that announcement will be made prior to Aug. 17.

“We want to play sports during this upcoming school year and are making plans to do so; however, the health and safety of all participants, including coaches and other essential staff, will be a priority as decisions and plans are made,” stated NCHSAA Commissioner Que Tucker.

Meanwhile, the North Carolina Independent Schools Athletic Association (NCISAA) made a similar announcement. That organization said they would move forward with a tiered start.

Football, a high-risk sport, is postponed until at least Sept. 11.

The NCISAA had previously planned to begin competitions for all sports other than football on Aug. 31.

Competition standards are scheduled to be released by the NCISAA at a later date.