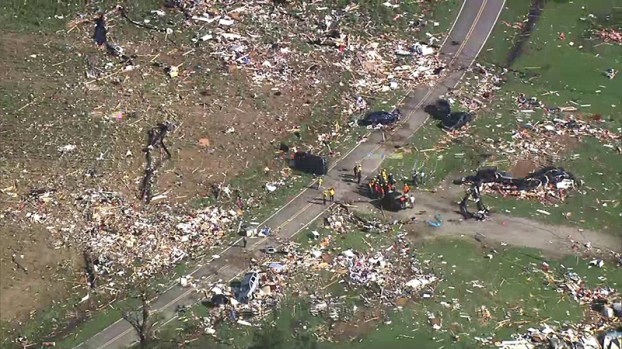 This photo taken by Sky5 – a helicopter owned by WRAL-TV in Raleigh – shows a wide swath of debris as well as overturned vehicles left in the wake of a Tuesday morning tornado that spun off Hurricane Isaias and hit a mobile home park on Morning Road in Bertie County.

WINDSOR – An apparent tornado that spun-up during Hurricane Isaias has claimed two lives at a mobile home park in Bertie County.

The names of the two victims were not available to the media as of RC News-Herald presstime on Tuesday evening. They were adults, one male and one female.

During the peak of the disaster response at the mobile home park on Morning Road, 12 others were transported to the hospital with storm related injuries, and at least 10 additional people were rescued and transported to local shelters.

No information was immediately available about those still in the hospital due to injuries suffered during the tornado. 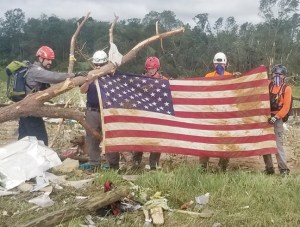 Tuesday morning, emergency crews at the scene of the deadly twister display a soiled American Flag that was discovered in the rubble. Photo courtesy of Woody Pierce

“Our community is hurting and our thoughts are with those families, as well as all of those who have been displaced because of this disaster,” said Ronald “Ron” Wesson, Chairman of the Bertie County Board of Commissioners.

Meanwhile, two children and their mother who were initially unaccounted for were all found safe. According to Bertie Sheriff John Holley, the mother was at work when the tornado struck the mobile home park and her two children were not at the residence.

Bertie County Emergency Services Director Mitch Cooper said first responders were on the scene before the storm passed over and battled strong winds, rain, and the dark of night to continue to respond to calls for assistance. He added that downed trees also presented a problem in appropriately responding.

Possibly as many as 12 mobile homes were destroyed. Numerous vehicles, some flipped over in the strong winds, were also heavily damaged.

“We are extraordinarily grateful for the assistance of community non-profits, churches, and local law enforcement agencies who continue to assist us,” stated Wesson. “We had so many area agencies standing at the ready to spring into action. Our hearts are heavy as we continue to survey damage and get the big picture about what transpired, and just how many were impacted.

At this time, the county is not able to receive the donation of goods such as bottled water, clothing, and other items as storage is limited. Any changes will be announced.

Bertie citizens who are displaced from Hurricane Isaias are encouraged to call 252-794-6144. Those wishing to inquire about monetary donations, or to submit a damage assessment request can call the same number.

All requests will be filtered and relayed to the appropriate county staff.

they are evacuating to a shelter.

“Members of our dedicated Emergency Operations Center are working diligently to ensure those in need of temporary shelter are being taken care of, and we ask that our community continue to pray for Bertie County in the days ahead,” stated Cooper.

JACKSON – With Hurricane Isaias lurking on the horizon, preparations are already underway in Northampton County for its arrival. The... read more