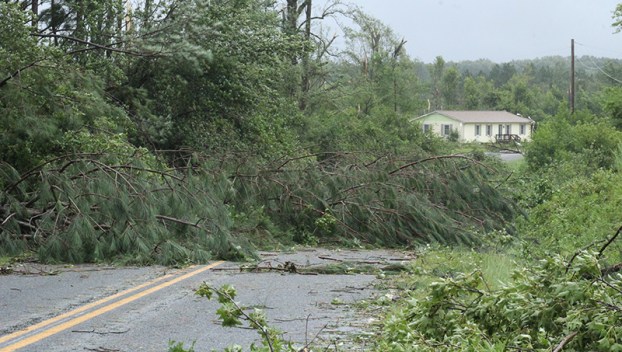 Downed trees block a portion of Vinson Mill Road in Hertford County on Tuesday morning. This area was also where three people were trapped inside their home after a tree came crashing down. Those individuals were rescued and not seriously injured. Staff Photo by Cal Bryant

Later on Tuesday, Hertford County Emergency Management Director Chris Smith was is in the process of performing a damage assessment from the tornado, which struck overnight during one of the significant squalls (rain bands) to spin off the hurricane.

“Our initial assessment there found damage to 15 structures,” he noted.

Two homes were evacuated during the peak of the storm. Evacuees are sheltering in motel rooms through an effort of the American Red Cross, Smith said.

Meanwhile, Smith said the process to restore electrical service in Hertford County may take more than one day.

As of 11 a.m. Tuesday, nearly 4,000 homes throughout the county lost power due Hurricane Isaias. Dominion Power reported 3,392 homes without electricity while 572 member-owners of Roanoke Electric Cooperative were impacted.

“This could take a few days for some to get back to full power,” said Hertford County Emergency Management Director Chris Smith.

He added that the county’s roads are passable.

“DOT is clearing the few trees we had off roadways,” Smith stated.