CONWAY – Conway Fire Chief Albert Vann reported that the fire department fortunately hadn’t been paged out as Hurricane Isaias made its way through the area, but it was his own property which seemed to be hit the hardest in the Northampton County town.

“I say it was definitely a tornado. I heard it anyway. And you can track it,” Vann told the News Herald on Tuesday morning as the last remnants of the storm left the Roanoke-Chowan area. 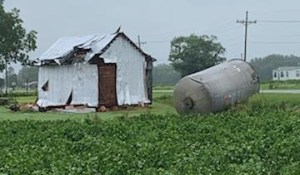 A farmer in Conway snapped this photo of damage to his property.

He said he got the warning at 3:21 a.m. and the tornado came through two minutes later.

In the aftermath, he discovered tree limbs scattered around, some large empty storage tanks from his farming operation blown towards the highway, a barn shifted off its foundation, and some shelters with the roofs blown off. A tree had also hit the back of his house.

He reported that they still had power, however, while much of the rest of Conway did not. Around town, he said he saw several tree limbs down but not a lot of other damage.

“The main thing is that the family is safe and fine, and everything else can be replaced or cleaned up. I ain’t worried about that. We’re very fortunate,” Vann concluded.