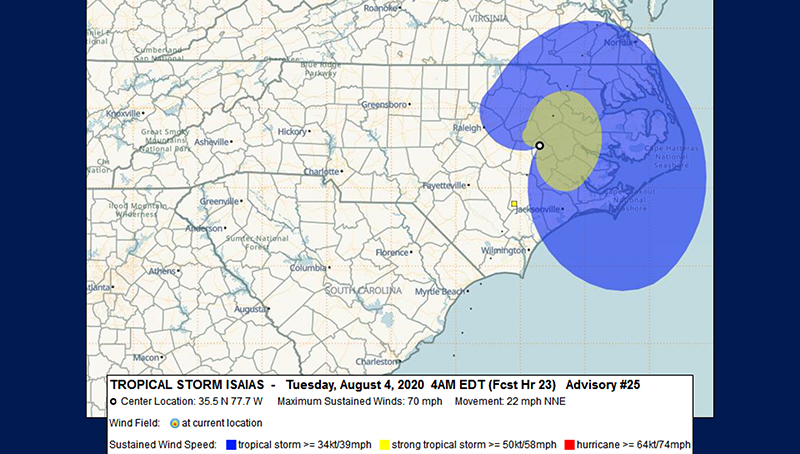 Isaias is on his way.

The tropical system, which is expected to gain hurricane strength (winds of at least 74 mph), is projected to make landfall tonight (Monday) near the North Carolina-South Carolina border.

According to the National Weather Service (NWS) office in Wakefield, VA, the main impacts of Isaias are now expected across the local area from late tonight through Tuesday. 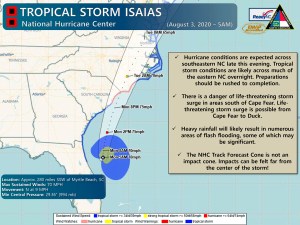 Tropical storm force winds (greater than 39 mph with stronger gusts) may cause power outages and downed trees, especially along and east of I-95 (where a Tropical Storm Warning is in effect).

All four R-C area counties are under the Tropical Storm Warning.

There is the potential for flash flooding, especially inland from the coast. Minor to locally moderate river flooding is expected from mid to late this week. There is a Flash Flood Watch for all four of our local counties.

Storm surge (which locally will impact the Albemarle Sound) will generally be 1 to 2 feet above normally dry ground in vulnerable areas.

There is an increased threat of tornadoes across eastern portions of the area. Tornadoes can occur well ahead and away from the storm center.

Hertford County Emergency Management Director Chris Smith said this morning that based on the latest info from the NWS, the local area can expect to 2-to-3 inches of rain and sustained 40+ mph winds with possible gust to 50-60 mph.

“As dry as it has been lately, we should be ok with rain amounts. With wind predictions, I think we can expect some downed trees and power outages,” Smith said.

Smith did note that areas north and west of the Roanoke-Chowan area have the potential to receive higher amounts of rain (4-to-6 inches).

“We will have to monitor this later in the week of how that will affect Ahoskie and Potecasi creek levels. Being so dry, we can handle a little rain right now; it just depends on fast it falls as to the effect of the creeks,” he said.