Chase ends with crash and arrest

AHOSKIE – A local man and his young daughter are lucky to be alive after a vehicle they were in was riddled with bullets near here Monday afternoon.

Following a chase that ended in a wreck, Hertford County Sheriff’s deputies arrested a suspect believed to be responsible in the shooting. 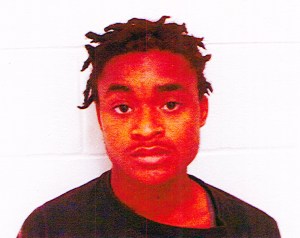 Justin Ramon Goodwin is being held under a $750,000 secured bond on several charges, to include two counts of attempted first degree murder.

Justin Ramon Goodwin, 21, of Hill Street, Cofield, is now locked up in the Hertford County Detention Center, held under a $750,000 secured on two counts of attempted first degree murder. He was also charged with 11 counts of discharging a weapon into an occupied vehicle, two counts of assault with a deadly weapon with intent to kill, two counts of assault by pointing a gun, injury to real property, and flee to elude arrest with a motor vehicle.

According to Hertford County Sheriff Dexter Hayes, the incident happened shortly before 1 pm on Monday on Church Road near the Earley’s Station community.

There, Tracy Mitchell, 27, of Jernigan Airport Road was in his pick up truck with his daughter, en route to dump some trash. Mitchell told the investigating officers that he had earlier noticed a dark in color Nissan passenger car parked near his home. He said he saw that vehicle again on Church Road, at which time the driver exited, knelt down in the roadway and opened fire on his truck.

Fortunately, neither Mitchell nor his daughter were struck by the bullets. Investigators later documented multiple bullet holes in Mitchell’s truck, including several on the driver’s side, the front grille, and the rear driver’s side tire. The driver’s side window was shattered.

With Hertford County deputies advised of the shooting and a brief description given of the suspect vehicle, Sgt. Tyrone Ruffin spotted that car a short time later traveling on NC 45 near Cofield. He attempted to make a traffic stop of that vehicle, but the driver sped off.

A chase ensued along Thomas Bridge Road, Mooretown Road, and John Moore Road before ending on the unpaved portion of Ward Road. It was there that Goodwin apparently lost control of his vehicle and it overturned in a ditch.

Goodwin, who was not injured in the crash, was immediately taken into custody.