On Friday night, the Redbirds built an early lead and held on to defeat Kinston, 9-7.

Trailing 1-0, RC Twin Rivers grabbed the lead for-keeps in the bottom of the first inning where Trent Hobbs ripped a three-run homer for a 3-1 lead for the Redbirds. 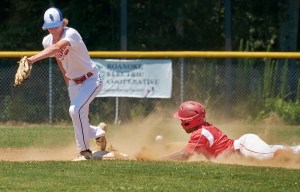 Tyrek Beverly successfully steals second base after leading off Sunday’s afternoon’s home game vs. Bear Grass with a single. Beverly would score his team’s first run, thanks to a RBI double off the bat of Trent Hobbs, and RC Twin Rivers went on to post a 7-4 win. A.A. Imaging / Andre Alfred

They padded their lead to 5-1 in the bottom of the fourth on RBI singles by Parker Bradley and Hobbs.

After Kinston trimmed their deficit to 5-3 by plating a pair of markers in the top of the fifth, RC Twin Rivers got one of those runs back in the home half of the same inning where they took a 6-3 lead thanks to an RBI groundout by Avery Harris.

The Redbirds added three runs in the bottom of the sixth, increasing their advantage to 9-3. There, Bradley lined an RBI double; Hobbs raced home on a wild pitch; and Logan Earley had an RBI sacrifice fly.

Kinston rallied for four runs in the top of the seventh to account for the 9-7 finale.

Earley pitched four and two-thirds innings for the win, allowing three runs on four hits and striking out seven batters.

On Sunday afternoon, Bradley led the Redbirds by going 3-for-3 at the plate and also worked five-plus innings on the mound for the win as the Redbirds beat Bear Grass, 7-4.

Just as they had done on Friday vs. Kinston, RC Twin Rivers rallied from an early deficit to pull out a win.

After Bear Grass built a 2-0 lead in the top of the first inning, RC Twin Rivers answered in the home half of the same inning, scoring four times to grab the lead for-keeps. There, Kevin Noon had the big hit – delivering two runs with his RBI double. Hobbs kept his hot bat going by adding an RBI double while Bradley laced an RBI single.

Noon smacked another RBI double in the bottom of the third inning where RC Twin Rivers increased their lead to 5-2.

That advantage swelled to 6-2 in the bottom of the fourth where Bradley plated a run with his RBI single.

RC Twin Rivers scored its final run in the bottom of the fifth frame and led 7-2 when Lassiter raced home on a wild pitch.

Bear Grass closed with a pair of runs in the top of the sixth.

The Redbirds enjoyed a big game offensively by banging out 11 hits. Other than Bradley’s performance, Noon had two hits and three RBI’s while Hobbs also chipped in two hits. Beverly, Harris, Chase Edwards, and Cody Higginbotham each added one hit.

RC Twin Rivers will play Martin County on Thursday and Johnston County on Friday. Both games are at 7 p.m. and both are at Hertford County High School.

In less than two weeks, funds that have served as a lifeboat in these rocky waters known as the COVID-19... read more