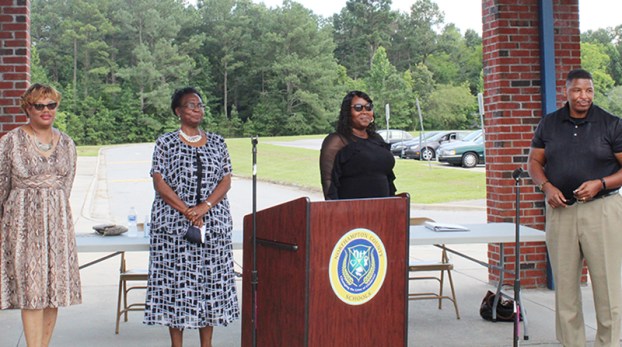 Accepting their oath of office as members of the Northampton County Board of Education on July 1 are, from left, Barbara Stephenson, Josephine Dunn, Theresa Scott, and Tony Burnette. Staff Photo by Holly Taylor

JACKSON – Most swearing-in ceremonies take place inside, with family and friends and other supporters seated in the audience to watch the proceedings. But the ongoing COVID-19 pandemic has affected even this regular aspect of life.

Four new members of the Northampton County Board of Education were sworn in at a meeting on Wednesday, July 1. But due to social distancing procedures and precautions meant to stop the spread of the virus, the event was held outdoors in the parking lot of Central Elementary School in Jackson.

Board of Education members and other school officials conducted the event clad in masks. People who came to watch the ceremony stayed inside their cars or stood beside them away from others.

Despite the unusual circumstances, however, the Board members maintained their focus on the students of the school district as well as unity amongst each other.

The four new members, who were elected earlier this year during the March primary, are Josephine Dunn, Barbara Stephenson, Theresa Scott, and Tony Burnette. They unseated the three incumbents who were running for reelection. One previous member of the Board chose not to seek another four-year term.

After a brief welcome from Board Chair Rhonda Taylor, each member stepped up to the podium to take the oath of office, which was administered by Northampton County Clerk of Court Laquitta Green-Cooper.

All four were given the opportunity to speak briefly after the swearing-in ceremony. They expressed gratitude for support and optimism for the future of education within the county.

“The decisions I make will not be about me. They won’t be about other board members or any politics, but about the progress of our students,” said Dunn in her remarks.

She cited the guidelines from the NC General Assembly, which state that “it shall be the duty of local boards of education to provide students with the opportunity to receive a sound education” and then said she would make her decisions based on those policies.

“Please continue to support us in this endeavor,” she concluded.

Stephenson followed with a similar message.

“I’m very transparent. I’m very open. If there is a concern, please do not hesitate to reach out and have a conversation,” she continued.

She wrapped up her speech by urging citizens to maintain their support and uplift the students during the “very challenging year” ahead.

Like the other speakers, Scott thanked the people for casting their votes in the March election.

“We are here to change the lives of children, and I intend to do just that,” Scott said, noting that she’s not only a concerned citizen but also the parent of two current Northampton County Schools students.

“Our children aren’t ‘less than,’ and they deserve more. I look forward to working with the superintendent and the other amazing elected board members to move our county forward,” she concluded.

Burnette spoke last and echoed the same sentiments of his fellow board members.

“We made you a promise on the campaign trail, and I intend to keep that promise to make sure that we uplift every child in Northampton County without leaving any child behind,” he explained, also noting that promise extended to teachers and staff as well.

“This board stands together,” he vowed. “You will never see me fighting with a board member. You will always see me put the needs of our children first. I promise you that.”

Following the swearing-in ceremony, the Board convened for its first meeting with the new members. Their first action after a closed session was to rescind the termination of Superintendent Dr. Pamela Chamblee’s contract.

As previously reported by the News Herald, Chamblee’s contract was terminated in a 5-2 vote at a June 18 meeting by the previous board. The new board voted 5-1 on July 1 to bring her back. One member was absent from that meeting to vote.

MURFREESBORO – The building which has housed athletic facilities at Chowan University for decades will now bear a new name:... read more