Dawaunti is the daughter of Dawaun Combs, Sr. and Delinda Williams of Windsor. She has three brothers, Dawaun Combs, Jr., Damian Combs and Sema’j Freeman.

Dawaunti plans to earn an associate in arts degree from Cape Fear Community College in Wilmington and “to make it to the League.” 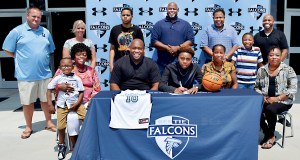 She has more than 1,000 total career points.

During the 2019-20 regular season for the Lady Falcons, Combs was second in the conference for scoring, 18th in rebounding, 5th in field goal percentage, 2nd in free throw percentage and 1st in assists.

Combs said she chose Cape Fear Community College because she knows the coach there is good. “And I know the school is good, and I know they will push me to where I want to be.”

Combs said that all through high school, she knew that “being down” wasn’t for her.

“So I wanted to push through,” she said. “One of my biggest motivators was my aunt, who passed away in 2010; she was my biggest supporter, and she also did my hair.”

Combs aspires to become a player in the WNBA.

She added that she wants to thank her mom, the staff of Bertie High School, her family, friends and coaches.

“And it’s my teammates who I emulate; they made me who I am today. They all made me the better person I am today,” she added.