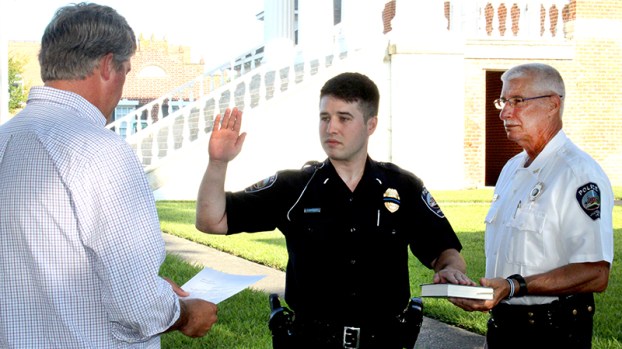 Changing of the Guard

JACKSON – As the old saying goes, he’s got some big shoes to fill.

The town of Jackson has a new police chief at the helm for the first time in more than two decades with Austin Simmons taking over the position after the retirement of John Young. A small swearing-in ceremony was held here Wednesday, July 1 to commemorate the occasion.

“On behalf of the town board, we’re excited about this. We think he’s going to be a perfect fit for the town,” said Jackson Mayor Jason Morris as he welcomed the group of well-wishers which included family, friends, and members of local law enforcement.

Former Chief Young held the Bible for Simmons as he took the oath of office.

Simmons, who has been with the department for the past five years, said he was both excited and nervous to take this next step in his career.

“I’m honored to be given this position,” Simmons said. “I couldn’t have had a better chief to work for and follow behind. It’s a blessing to be here.” 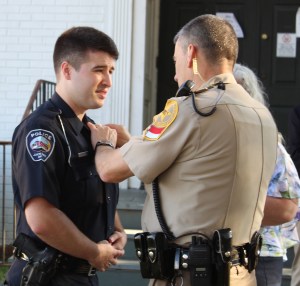 Northampton County Sheriff’s Deputy Brian Simmons pins the Chief bars on the uniform of his son as part of Wednesday morning’s ceremony in Jackson. Staff Photo by Holly Taylor

Not only will Simmons serve as police chief, but also as the town’s Public Works Director, just as Young did during his tenure. Simmons still has two more certifications to obtain for that position but he is already working towards completing them.

“I want to do everything in my power to continue to make the town as safe as it is, and just make it better for everyone who lives here,” he continued. “I’m not above listening to people and taking criticism. It’s not something I shy away from.”

The new chief has a history of law enforcement in the family. He’s the son of Brian and Lou Ann Simmons, and he has one sister, Kelli. Both Brian and Kelli serve with the Northampton County Sheriff’s Office.

“I’m proud of him,” Young said of the officer he’s helped train for the past five years.

“I knew he’d be a good fit,” he continued. “He knows how to talk to people. He has the same passion and compassion in this job that you have to have. I’m looking forward to great things from him. No doubt in my mind he’ll do a wonderful job.”

After taking some time to enjoy his retirement, Young said he will continue to serve part-time with the police department and will offer support and guidance to Simmons whenever needed.

Looking back on his law enforcement career with the town of Jackson, Young said it’s been “a great journey.”

“This town’s been awfully good to me,” he acknowledged. “I never felt like I was going to work. I loved it. And I love this town and the people in it.”

“God works in mysterious ways and I know He directed me to be here for a reason,” Young said.

Above all, Young said his family was crucial throughout the years, and he couldn’t have continued so long without their support.

“They have missed a whole lot of time with me because of this job. That’s just the nature of this profession,” he admitted.

He said his wife Sandra has been his “rock” the whole time. Young said he was looking forward to spending more time with her, their children, and his two granddaughters.

JACKSON – Less than two weeks after her contract was terminated by the Board of Education, Dr. Pamela Chamblee is... read more