Despite a great start for the home-standing Redbirds, Wayne County rallied to tie the game and then win it in the top of the eighth inning, 9-8.

Trailing 2-0, R-C Twin Rivers scored five runs in the bottom of the first inning to race out to a quick 5-2 lead. Avery Harris lined a two-RBI single for the Redbirds in the home half of the first frame while Bryce Stevens and Parker Bradley each added run-scoring singles. Kevin Noon also plated a run with his RBI sacrifice fly. 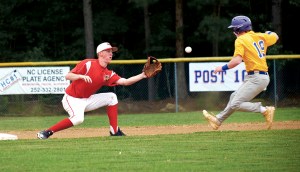 Wayne County answered by scoring two markers in the top of the second and then added three more in the third to claim a 7-5 lead.

Things were quiet over the next two innings before the Redbirds rallied for three runs in the bottom of the sixth to take an 8-7 lead. There, Trent Hobbs had the big hit, smacking a two-run double while Noon added an RBI single.

But the Redbirds failed to protect that lead as Wayne County forced extra innings by tying the game at 8-8 with a single run in the top of the seventh before scoring the winning run in the eighth.

R-C Twin Rivers banged out 15 hits in the game, led by three each from Hobbs and Noon.

Harris, Logan Earley and Hobbs worked the mound for the Redbirds. Hobbs was charged with the loss.

Wayne County built a 9-1 lead in the back half of the doubleheader en route to the sweep thanks to their 13-5 victory.

Wayne County scored five runs in the top of the third.

R-C Twin Rivers got one of those runs back in the bottom of the third on a Chase Edwards bases-loaded walk.

The visitors added four runs in the top of the fifth to increase their advantage to 9-1.

The Redbirds put together a rally in the bottom of the sixth, scoring four times on a wild pitch (David Basnight), an RBI sac fly by Tyrek Beverly, an RBI single off the bat of Hobbs, and another run off a wild pitch (Stevens).

Wayne County put the game on ice by scoring its final four runs in the top of the seventh.

R-C Twin Rivers was limited to only three hits, two of which came from Hobbs.

The Redbirds also have a home doubleheader vs. Cary beginning at 2 p.m. on Sunday, July 5.