Tied at 3-3 heading into the bottom of the fifth inning, Logan Earley worked the Martin County pitcher for a lead-off walk. Earley advanced to second and third on consecutive groundouts before scoring what later proved to be the game-winning run on a wild pitch. 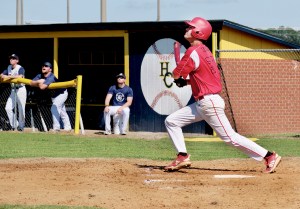 Logan Earley, shown here at bat in an earlier game, turned in a key performance in Thursday’s 4-3 win over Martin County where he scored the game-deciding run, added an RBI single, and pitched the final one and two-third innings to notch the save. A.A. Imaging / Andre’ Alfred

Earley also had a hand in his team’s first run of the game.

RC Twin Rivers opened the scoring with a solo marker in the bottom of the first inning. There, Trent Hobbs laced a double and raced home on Earley’s RBI single.

After Martin County tied the game at 1-1 in the top of the second, RC Twin Rivers answered by plating a pair of markers in the bottom half of the inning. There, pinch runner Zack Lassiter raced to third on David Basnight’s single and scored on a throwing error. Basnight advanced to second on that same error and scored from there when Tyrek Beverly reached on an error.

Martin County rallied to tie the game at 3-3 by scoring one run in the third and fifth innings.

RC Twin Rivers collected four hits in the win, led by Earley who has two hits.

Bryce Stevens pitched the opening four and one-third innings for the home-standing Redbirds. Anthony Lancaster entered on the mound in the top of the fifth and was credited with the pitching win. Earley hurled the final one and two-third innings and was awarded the save.

RC Twin Rivers improved their record to 2-4 and will host Wayne County in a 2 p.m. doubleheader on Sunday at the Hertford County High School baseball field.

Simple steps to how to wear a mask

I know this may come as a shock to some of you, but the COVID-19 coronavirus pandemic isn’t over yet.... read more