Seat at the national table

WINDSOR – A seat at the “national table” – that’s where Tammy Lee once dreamed of sitting.

She now has that seat.

Last month, the North Carolina Association of County Commissioners (NCACC) Board of Directors met virtually via teleconference to elect an NCACC representative to serve as National Association of Counties (NACo) Director. The seat was vacated by Ray Jeffers, Person County Commissioner, who was recently elected to serve on NACO’s Executive Committee as the South Region representative. 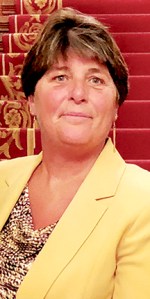 “I’m excited about this opportunity to serve at the national level,” Lee told the Roanoke-Chowan News-Herald. “It’s something I’ve wanted to do since becoming a county commissioner.”

Lee, first elected as a Bertie Commissioner in 2014, has been actively involved with the NCACC and the NACo since that time.

“Most of the time, small counties don’t have voice on the big stage,” she noted. “I wanted to be that voice; I wanted to have a seat at the national table in order to bring attention to the issues we face each and every day.”

Lee said among those issues is an overall lack of broadband service in rural counties.

“Broadband is a national issue, more so for our rural counties,” she emphasized, “and this [COVID-19] pandemic brought that to the forefront.”

Lee added that she would also be a “voice” for agriculture and education at the national level.

Lee has held various leadership positions at the state and national levels, including serving on the NCACC Board of Directors, and Vice Chair of NACo’s Law Enforcement Subcommittee. Lee also serves as the current chair of the NCACC Justice and Public Safety Committee, and as a member of the NACo Justice and Public Safety Committee, and the NACo Veterans and Military Services Steering Committee.

Lee has nearly 20 years of experience as a law enforcement professional, including hostage negotiation, and previously worked for Bertie County Public Schools.

Lee added that due to the COVID-19 pandemic, the NCACC and NACo have canceled their annual conventions.

“We will still meet by Zoom (a computer-based conferencing program) because we still need to get things done,” she concluded.