In the opener, Logan Earley and Trent Hobbs combined to pitch a five-hitter as the Redbirds scored an 8-5 win.

RC Twin Rivers trailed only once in the game after Martin County scored a single run in the top of the first inning. 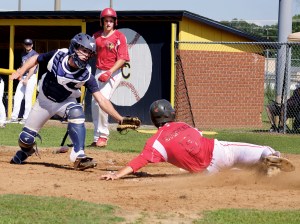 The Redbirds took the lead for-keeps in their first at-bat when Tyrek Beverly, Hobbs, and David Basnight all raced home on a bases-loaded outfield error as the home team grabbed a 3-1 lead.

The Redbirds padded their lead to 5-1 by scoring a pair of runs in the bottom of the third inning. Kevin Noon and Basnight plated those runs as each had an RBI groundout.

That advantage grew to 7-1 in the bottom of the fourth frame where Alden Lassiter plated a run with his RBI sacrifice fly followed by an RBI groundout off the bat of Noon.

After Martin County scored a pair of runs in the top of the sixth to make it a 7-3 game, RC Twin Rivers answered in the home half of the same inning, scoring once when Lassiter raced home on a wild pitch.

Martin County scored twice in the top of the seventh to account for the 8-5 finale.

Earley pitched five innings to collect the win, allowing one earned run off two hits. Hobbs hurled the final two frames and collected the save.

In the back half of the doubleheader, Martin County scored six runs in the fifth inning, breaking open a tight 3-2 game en route to a 9-2 win over the Redbirds.

Trailing 2-0 in the early going, RC Twin Rivers cut that deficit in half during their first at bat where Lassiter’s sacrifice fly plated a run.

The Redbirds tied the game at 2-2 by scoring once in the bottom of the third thanks to an RBI single off the bat of Beverly.

Lancaster and Duke shared the pitching duties for the Redbirds in game two.

RC Twin Rivers (with its 1-3 record) will play at Martin County on Thursday in their next game.