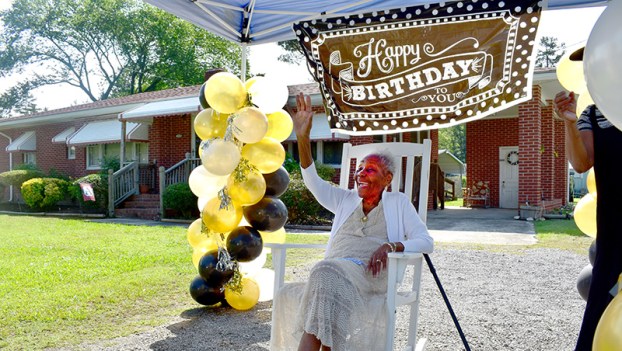 Mabelle Williams Archer waves from her rocking chair as another vehicle passes by her Winton residence as part of a parade to honor her 100th birthday on Friday, June 19. Photo by Jazmine Bunch

WINTON – A small back road in Winton was lined with cars Friday morning, June 19, as family and friends celebrated life — 100 years of life, to be exact.

Hertford County native Mabelle Williams Archer sat in a white rocking chair in her driveway, waving cheerfully as guests drove by honking the horn, waving, and leaving gifts during her 100th birthday parade.

The parade was organized by her three daughters, Zenobia Archer Williams, Alberta Archer, and Doris Archer, along with the town of Winton.

They presented her with certificates and resolutions from their respective office congratulating her on 100 years of life.

One hundred healthy and happy years of life, her daughter Zenobia would say. She said her mother still lives by herself, taking care of most of her everyday needs on her own, with the exception of cooking and driving.

“We stopped her from driving two years ago because she was driving too fast,” Williams said with a chuckle.

In addition to an active lifestyle, Mrs. Archer is very active at her church, Mt. Moriah Baptist, where she was an usher, deaconess and missionary “in two-inch heels.” She recently stepped down from her positions, but she continues to attend service faithfully.

One of the highlights of her birthday parade were her guests coming to give words of encouragement and praise.

She was visited by Reverend Dr. James Shearn of Jordan Grove Baptist Church, who led a prayer, and cousin Jesse Holloman, who attested to Mabelle’s faith.

“God has given all of us a number, and at His time and His will, He calls our number,” Holloman began. “But I believe that [with] sister Mabelle and her relationship with Him, He has foregone her number. He is leaving sister Mabelle here as a testament to His goodness.”

Mrs. Archer enjoys working in her yard and tending to her flowers, attending church, and dedicating time to her children and grandchildren. She has three granddaughters, three grandsons-in-law, five great grandsons, and two great, great granddaughters. She honors the memory of her late husband, Elbert (Posie) Archer, whom she was married to for 68 years.

All five generations of Archers were present to celebrate the longest-living member of their family on her special day.

Even with the heat and social distancing, there wasn’t a moment during the parade where Mrs. Archer wasn’t smiling.

“I feel good,” she said with a reflective smile, “good to be here.”

She usually celebrates her birthdays with all of her family, so her parade was just as special as previous celebrations.

As mentioned in her proclamation, Mrs. Archer has lived during a very “eventful century of the world’s history,” so she has been alive to witness events similar to those we face today. But she experiences symptoms from early stages of dementia, so she’s unaware of COVID-19 and the current civil climate.

Her daughters stood by her side during the parade, collecting gifts and helping her to identify her many attendees. Later in the day, they planned a private celebratory, socially-distanced brunch in her yard.

With the sun shining bright and plans to party all day, Mrs. Archer and her family were able to take a moment to find joy in the chaos, and celebrate life amid loss and grief.

Seat at the national table

WINDSOR – A seat at the “national table” – that’s where Tammy Lee once dreamed of sitting. She now has... read more