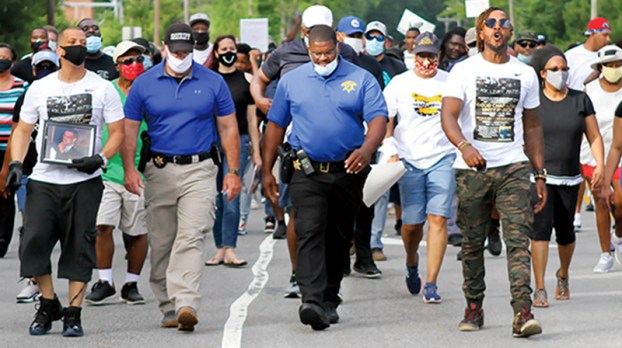 No room for hate

GATESVILLE – Pastor William Wiggins Jr. felt the burden, it was like a heavy metal bar pressed upon his shoulders. That weight had been present for a long time and he prayed for relief.

The Gates County native also witnessed that burden placed upon others. Some chose to silently bear that added weight; some collapsed under the pressure.

In the late afternoon hours of June 10, Wiggins and many within a large crowd gathered outside the Gates County Community Center reached deep inside their souls cleansed themselves of hated. 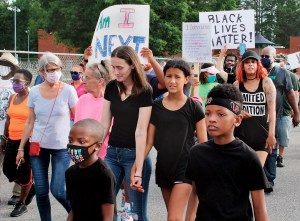 Participants carry signs during the march after listening to the emotional words of Pastor William Wiggins Jr. Staff Photo by Cal Bryant

Wiggins helped to organize a Good Character Unity March, an event held in an effort to heal old wounds in Gates County. It came on the heels of the May 25 murder of George Floyd at the hands of Minneapolis, Minnesota police officers. That death sparked a national outrage, and calls for police reform.

Wiggins shared info about his family tree, saying he was the son-in-law of Butch Creecy, a man who was a victim of police brutality.

He said a huge crowd gathered 20 years ago at the Gates County Community Center where a funeral was held for Dedrick and Derrick Watford, two brothers tragically killed in a car crash.

“While everyone was gathered here and all the attention was right here at that funeral, they found the body of my father-in-law,” Wiggins said, adding that the authorities had previously refused to drag the river despite pleas from the family. “You don’t just go and find something that’s not lost. They just went and got him from where they left him.

“It’s for that reason we decided to strategically choose this spot [for the unity rally] to eradicate a death that’s still not solved,” he added.

Hollis Frissell “Butch” Creecy went missing on Feb. 14, 2001. Two and one-half months later (April 28), Creecy’s body was discovered floating in the Chowan River near the Gatesville Wildlife landing. An autopsy revealed he had died from a gunshot wound. Despite an investigation by the Gates County Sheriff’s Office, the SBI and the FBI, the case remains unsolved.

“For a man like myself who once hated the sheriff’s department, and rightfully so, I realize today the weight I carried on my shoulders for far too long,” Wiggins stressed. “Any time you hate, you have to put forth a certain effort to so do. To change the landscape, today the son-in-law of a victim of police brutality is walking hand-in-hand with law enforcement. They agreed that enough is enough.”

“All across the world over these past few weeks we have come together, black, white, brown, and like myself, a pretty yellow,” Wiggins said. “We have marched together as we call for change.”

Wiggins said he heard all the chatter before Wednesday’s event about how “Gates County will never come together.”

He added that some were concerned over the selection of the county’s Community Center and the high school to hold the event.

“Some said I was a coward; I was too scared to step foot by certain monuments,” Wiggins noted. “The reason we chose this spot is because it’s greater than the Confederate monument in Gates County, it’s greater than any monument across the USA. This spot is a memorial for my family, and I express my love and gratitude to our current county sheriff, Mr. Ray Campbell, joining with us as we all try to make a difference.”

Campbell, a veteran law enforcement officer, was quick to point out that what transpired on May 25 the streets of Minneapolis, Minnesota was wrong.

“All I can say is that what happened to Mr. [George] Floyd is a tragedy,” said Campbell.

Campbell said since being elected to office in 2018 he has worked hard to put together a great team of officers.

“Their job is to protect you, the citizens of Gates County,” Campbell noted. “One thing I will not tolerate is misconduct; I won’t have it. Do they make mistakes, yes. Are they held accountable, absolutely.”

In closing, Sheriff Campbell shared two lines from a Thomas Rhett song: “In a world full of hate, be a light. If you do somebody wrong, make it right.”

Kenny Rountree, also a native of Gates County now living in Garner following a military career with the U.S. Air Force and the National Guard, assisted Wiggins in staging the event.

Rountree noted that 15 or 20 years ago, this type of event would have never happened in Gates County.

“All we can do right now is what we’re doing here today, getting the ball rolling,” he continued. “Soon we’ll see that ball roll a strike and we’ll be okay. People are here who want to make a change.

Those assembled then followed Wiggins, Rountree and Campbell as they led a unity march through the parking lot of the Community Center and the high school. The march then turned onto US 158, blocked off by several law enforcement vehicles, as they walked back to the Community Center.

“The importance of this event was the community coming together in love and not opposition. This march was just the first of many conversations we need to heal as a society. No matter in which direction we’re heading, it’s important to realize at this particular point that we cannot ever return to where we’ve been,” Wiggins concluded.

WINDSOR – Unpredictable times often call for unpredictable measures. And no one can understand that better than the graduating Class... read more