MURFREESBORO – Just a little initiative from one officer ended up benefiting the whole department.

The Murfreesboro Police Department recently received three new bulletproof vests to replace older ones, and it’s thanks to MPD Sgt. Bryan Johnson who looked for a grant to save money. 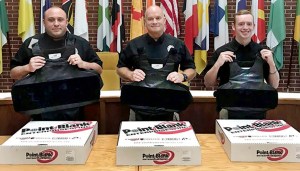 The new vests came from the United States Deputy Sheriff’s Association, a nonprofit based in Wichita, KS, which provide training programs, equipment donations, and other support to law enforcement across the country.

“It worked out great for us. It didn’t cost the town anything,” Griffith reported, noting that the vests were donated free of charge.

Typically, the vests cost around $1,200 each, so Griffith estimated the town of Murfreesboro saved $3,600 with this donation.

Griffith said in the past they had received grants from other organizations to help them purchase new vests, but those never covered the entire cost. When Johnson approached him in April about this potential grant which would come at no cost to the town, Griffith gave his full support.

“I want to thank Sgt. Johnson for working so hard on something that’s normally not his responsibility, but he saw an opportunity. I told him to go for it, and he knocked it out of the park,” Griffith explained.