WINDSOR—On June 2, Bertie High School senior Alyssa Byrum signed to pitch for Pitt Community College’s Lady Bulldogs Softball next year. Number one in her class, she earned a softball scholarship and was praised by her family and staff for giving it her all “on and off the field.”

Alyssa is the daughter of Israel and Courtney Byrum of Colerain. She has a younger brother, Evan. Alyssa plans to study accounting at PCC in the fall, and she hopes one day to thrive at a large accounting firm in Cary.

“Cary is a pretty place,” she said. “And there’s lots to do there.”

While Alyssa’s senior season was cut short, due to the pandemic, and the Lady Falcons only played four games, she still can boast some remarkable stats.

Over the past three-plus years, her batting average was 368. As a pitcher, she had 32 wins and 21 losses over her abbreviated career, with an overall .604 winning percentage. 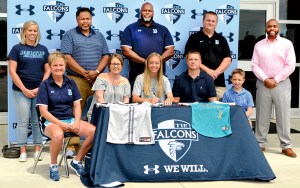 In addition, she has under her belt more than 350 strikeouts as a pitcher.

Her coach, Jackie Copeland, stated that Alyssa is at the top her class in academics. She was named Scholastic Athlete of the Year as a junior, as well as Pitcher of the Year for two out of her three seasons for the Northeastern Coastal Conference. She was First Team All-Conference for three years—and according to Copeland, she probably would have done so a fourth year, if it were not for the COVID-19 outbreak.

“It has been an honor to coach Alyssa Byrum,” Copeland said. “She is the type of player who gave it well over 100% in practices and in games. Her nickname was ‘Sunshine’ because she always had a smile on her face, no matter what.

“I love all my players the same,” Copeland continued, “but each one I have ever coached is always different and brings something special to the game and to the team. That is what it is like to coach student athletes.”

At the signing, Alyssa thanked her coaches, teachers, family and everyone who helped her along the way.

“I want to especially thank Coach Copeland, Brooke Bowen (Assistant Coach), J.P. Pippins (Travel Coach) and my parents,” she said. “Being part of the class that was quarantined, I will say that my motivation has been looking to the future, and not focusing so much on the here and now.”

Alyssa said she is looking forward to going to Greenville; she already has a lot of friends who are playing softball at PCC, as well as some others who will start with her in the Fall. She said she likes the team at PCC, and, “While I haven’t met the coach face to face because of the coronavirus, I have talked with her on the phone, and she seems really nice and easy get along with.”

Copeland said that initially, Alyssa will receive $425 per semester for her education, with the opportunity to get a “full ride” if she does well in the first year.

“I have no doubt that she will be able to accomplish that,” added Copeland. “She is a super student.”