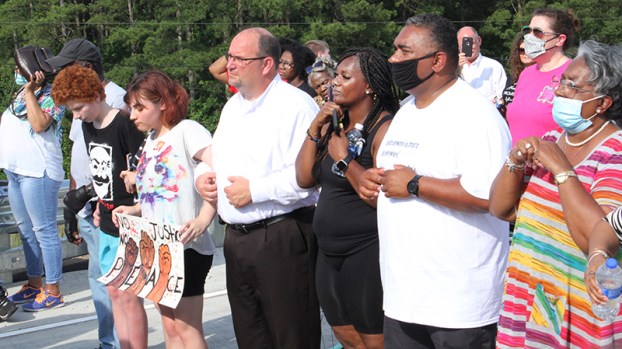 A small portion of Sunday’s crowd standing on top of the Modlin Road overpass lock or touch elbows in a show of solidarity against racial injustice. See the News-Herald’s Facebook page for additional photos from the event. Staff Photo by Cal Bryant

AHOSKIE – Even the threat of a deadly virus could not keep them away.

A crowd in excess of 100 gathered at the apex of the new overpass on Modlin Road near here Sunday afternoon where community leaders, clergy members, local law enforcement personnel, and citizens were united in love, standing together in a strong showing of solidarity against all injustices.

The event, organized by Clarence Hall, came nearly two weeks after the May 25 murder of North Carolina native George Floyd who died while in the custody of four police officers in Minneapolis, Minnesota. All of those officers have been arrested and charged, one for second-degree murder.

Floyd was laid to rest on Tuesday of this week in Houston, Texas.

Hall grieved over the death of Floyd and others who may have been targeted due to their race. 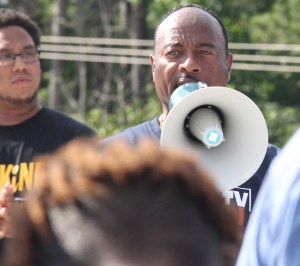 “We are experiencing a wide range of emotions right now…people are angry, people are hurting, not only from the senseless murders that are taking place, but also due to systemic racism,” Hall said, using a bullhorn to amplify his voice over the noise of the traffic passing under the bridge on NC 11.

“No matter who we are….black, white, Latino…we are still humans at the end of the day. We need to all realize that love is so much more powerful than hate,” Hall added.

Pastor Ray Faircloth Jr. of Ahoskie’s Higher Ground Church prayed for the nation to always follow the words penned in the U.S. Declaration of Independence, which, in part, says that all men are created equal.

“There’s a hurt in our heart because we all know there was an injustice done,” Faircloth said in his prayer. “Please touch our leaders, from the White House, to the courthouse, to our house. We pray for wisdom. We cry out to you Lord to end all racism. We pray for a cleansing of our hearts. There is only one race and that’s the human race.”

Hall said he struggled with the words he wanted to share at the event.

“We’re at a point now in our nation where we have to ask ourselves if an apology really makes up for the damage that’s already done,” he noted. “We have talked for years, now we must be called to action as one town, as one county, as one state, as one nation.

“It’s up to everyone here today, you have a responsibility to hold our leaders accountable,” Hall continued. “We need to have that unified voice and we can move forward together by removing the barriers that often separate us. Every black person isn’t a thug; every white person isn’t a racist. We need to rewrite that narrative.”

“Today, white, black, Asians, Hispanics, we’re all coming together as one, standing united against any and all injustices. We will not let the Devil take over; we’re taking our nation, our state, and our community back in the name of Jesus,” he stressed.

In prayer, Rev. Parker said, “We celebrate this spirit of oneness….one with the Father. Forgive us for our attitudes; forever us on how we sometimes feel about one another. Heal our hearts; heal our hurt…make us one people, united against the Devil, and we will give you all the glory and all the honor.”

Hertford County Sheriff Dexter Hayes attended the event, joined by several locally elected officials – county commissioners and the local District Attorney – as well as his deputies, officers with the North Carolina State Highway Patrol, and other members of the local law enforcement community.

“When I first saw what transpired with Mr. George Floyd, I was so ashamed,” Hayes admitted. “I’ve spent 20 years of my life doing a job that I love to do. The action of a few [law enforcement officers] brings a lot of pain to many.

“There’s a lot of great law enforcement officers here in our community, they interact well with our citizens, they go into our schools and work with our young people,” Hayes added. “They build bridges; they build partnerships. They live by the oath they took.

“We don’t see black or white or red, we see Hertford County citizens. We all need to work together to make sure that cases like George Floyd and others never happen here or anywhere else. It’s time for change and I’m ready for change,” the Sheriff concluded.

Howard Hunter III of Ahoskie, who represents the 5th District in the NC House of Representatives, asked those attending Sunday’s event to take a look at who was standing next to them.

“This is not just a black thing, we’re all in this together; we’re all upset over what took place on the streets of Minneapolis,” Hunter stated. “I’ll be the first to say that all cops are not bad; all people are not bad, but what George Floyd went through, no person should ever have to experience that. Some of that is now happening to our police, people are walking up to them and shooting them. For what? That’s not justice for George Floyd.

“If you want justice, there’s an election coming in November,” Hunter said as the audience erupted in loud applause. “Let your voices be heard then and there. I don’t want to hear any of you complaining if you didn’t go out and vote. You have the power to change things.”

Hunter added that he along with two of his colleagues in the NC House have been appointed by House Speaker Tim Moore to a bipartisan Task Force on Justice, Law Enforcement, and Community Relations following the death of George Floyd and protests across North Carolina.

“We’ve got to step up and do something,” Hunter stressed. “I need your help. Please pray for this task force as we attempt to bring about change in our hearts and in our actions.”
Jerrell Sessoms led a song – “I need you to survive” – as the large crowd locked arms together in a show of unity.

Rev. Dr. James Shearn closed out the half-hour gathering with a prayer. Before doing so, Hall challenged the audience to complete one simple task.

“Call, text, email our elected officials and tell them now is the time to engage in conversation to promote change in our land. We need to rewrite the narrative before another innocent soul dies in our streets.”

AHOSKIE – It was almost like a traditional graduation. Seniors marched in and out clad in their cap and gowns.... read more