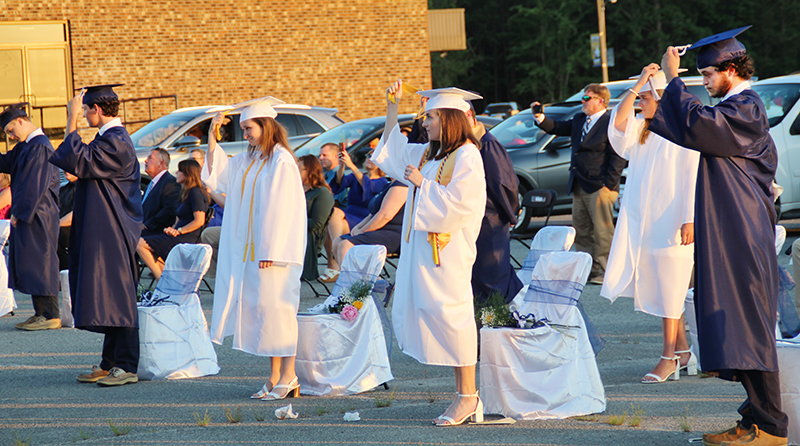 A portion of the 18 members of the Class of 2020 at Ridgecroft School perform the traditional turning of the tassels following an outdoor commencement exercise on Friday, June 5. Staff Photo by Holly Taylor

Seniors marched in and out clad in their cap and gowns. The class valedictorian and salutatorian delivered their speeches before the commencement speaker delivered his own. Each student walked across the stage to receive their diploma—the tangible proof which signals yes, you have indeed graduated from high school. 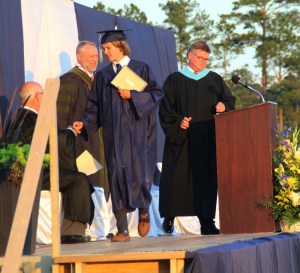 But life during the global COVID-19 pandemic means that, for the Class of 2020, things sometimes have to be a little more nontraditional.

At Ridgecroft School, that meant holding their annual graduation ceremony outside in the school’s parking lot on Friday, June 5. Chairs occupied by the graduates and their parents were spaced out in front of the stage set up by the baseball field. The rest of the attendees, including extended family and friends and school faculty, sat in their cars to watch and listen while showing their support for the school’s newest batch of alumni.

“We wanted to make sure that we did something very special and appropriate for our seniors,” said Ridgecroft Principal Russell Johnson. “We have been discussing and planning and reading and researching, trying to make sure we could do programs that would be meaningful and would give them a sense of graduation.”

Johnson said they considered several alternative plans, such as a “drive-thru” ceremony or an indoor ceremony, but they wanted to do something more memorable while still keeping in line with the governor’s orders and CDC guidelines on gatherings. The parking lot plan, he said, was approved by and developed in collaboration with the Hertford County Sheriff’s Office.

“Social distancing is something that we focused on. We’re making every attempt,” he continued.

A baccalaureate ceremony was held the night before graduation with the same procedures and guidelines in place.

Jennifer Rose, a Ridgecroft teacher and alum as well as parent to one of this year’s graduates, expressed gratitude to the school for making graduation extra special for the Class of 2020. 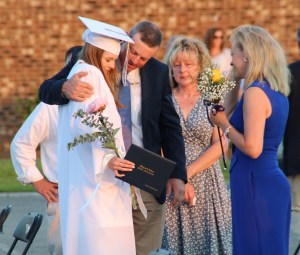 “Despite the pandemic we have all been faced with, Ridgecroft found a way to work together and make this the most meaningful baccalaureate and graduation for the senior class,” she explained. “It was so nice to be able to have family and friends there to support the seniors. For this, I am grateful.”

“I was worried we would not get to see them walk across the stage and receive their diploma,” she added.

Rose also said she was glad the parents were able to escort the seniors during the recessional at the end of the ceremony, something that has long been a tradition at the school.

“I am proud that my oldest daughter, Brooke, has joined me as an alumni of Ridgecroft,” she continued.

Though there were some differences in the way the graduation ceremony looked, much of the content remained the same as always.

Salutatorian Nate Place and Valedictorian Matty Grace Gilliam took turns on stage speaking encouraging words to their fellow classmates, reflecting on their years at the school and sharing advice for the future. Both noted their final year of high school was certainly unconventional, but while they missed out on some events they all looked forward to, they didn’t miss out on everything.

The commencement address was given by longtime Ridgecroft teacher and former athletic director Doug Cobbs. 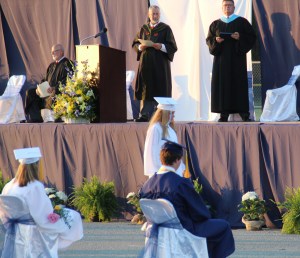 One of the 18 graduates at Ridgcroft School walks to the stage where Trustees Board Chairman John Boyd (center) and Headmaster Russell Johnson (left) wait to present the senior with her diploma. Staff Photo by Holly Taylor

“You will always be a part of Ridgecroft, but it’s time to move on,” he said in a heartfelt speech that provided a few laughs and a few tears along the way.

Cobbs called the 18 students of the graduating class by name, noting how long they’d attended the school and mentioning their individual plans for higher education or technical training. He quoted President John F. Kennedy—the famous “ask not what your country can do for you, but what you can do for your country”—to encourage them all to make a difference in the future.

Once each student had their diplomas in hand and the tassels were turned, a chorus of car horns and cheers echoed outside in celebration.

Speaking to the News Herald before the ceremony, Johnson said, “I think tonight will be meaningful for them and for their parents. They’ll remember that it was different but they will remember they walked across the stage and they were here with their families.”

This is Johnson’s first year as principal of the school, and he said it’s been a good experience getting to know the senior class.

“We have traveled a very interesting road together. They’re strong individuals. They have the capabilities to make good choices, and I’m sure they will,” he explained. “And I wish for them the best of everything as they step forward.”