WANTED: A 2012 graduate of Bertie High School who is missing their class ring.

This week, Sue Chadwick of Mt. Pleasant, SC reached out to the Roanoke-Chowan News-Herald via email with an interesting story to share. Her brother, Jim Swetland – an avid beachcomber who uses a metal detector, has a Bertie High School class ring among his wide assortment of items discovered below the sand.

Chadwick said her brother found the ring Nov. 14, 2018 on the beach at Sullivans Island, SC, located near Charleston, SC. 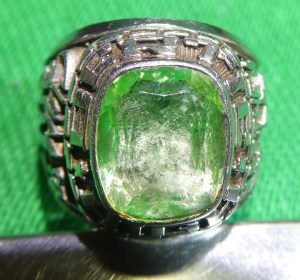 Shown here is the Bertie High School Class of 2012 ring found on the beach at Sullivans Island, SC. Contributed Photo

“I assist Jim in trying to locate the owners of jewelry items, at least those with etched descriptions that are still visible,” Chadwick said. “I started with 37 rings and I’m now down to only seven that I have not identified a possible owner.

“Google and Facebook Alumni sites are a help in my searches. So are some of those people finder sites online, but they offer a limited amount of information unless you pay for more,” she added.

The online search for the owner of the Bertie Class of 2012 ring turned up some information.

“An internet search indicates there may be a person residing in Windsor, North Carolina that appears to be in that particular age range [a 2012 graduate], but we have no other means to reach out to that person other than contacting you at the local newspaper there for help,” Chadwick stated.

“My brother would like to return this ring to its owner, so please contact me,” Chadwick stressed.

As a personal note, Chadwick said she and her brother grew up along the shores of Lake Erie in New York. They moved south in the 1970’s – Jim to North Charleston, SC and she just a few miles away in Mt. Pleasant.

“As a kid, Jim would beachcomb along Lake Erie looking for fishing lures way before he got into metal detecting,” she shared. “His only high tech possessions now were his metal detectors, that is until his flip phone broke a couple weeks ago and he bought an Iphone.

“He doesn’t use Facebook or email,” she added. “He would put ads in the paper years ago when ads were published free for found items, but that was discontinued and now he just stores them along with all kinds of other things he has found over the years.”

Those discoveries now include that Bertie High School ring he would love to part ways with by finding its rightful owner.

Filing opens next week for seats on the Bertie County Board of Education as well as for one seat each... read more