SUNBURY, NC – Lindsey Earl Spruill, Jr., 91, formerly of Sunbury and more recently of the NC State Veterans Home in Salisbury, died there on Wednesday, May 27, 2020.

Mr. Spruill was born in Washington County on May 3, 1929, and was the son of the late Lindsey Earl Spruill, Sr. and Emma Jones Spruill Clifton. A retired Boatswains Mate First Class with the United States Navy, his career spanned 20 years, with service on more than eight ships in the Korean War, the Cuban Missile Crisis, and the Vietnam War. 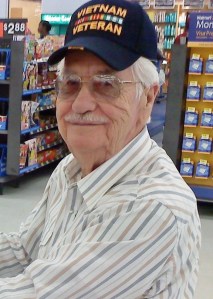 After retiring from the Navy, he owned and operated the Pungo Clearing & Drainage Company. Since moving to Sunbury nearly 25 years ago, he was a member of Kittrell’s United Methodist Church in Gates.

Due to restrictions and conditions caused by the COVID-19 virus, a private burial will be in the Gatesville Cemetery. A memorial service with military honors is being planned and will be held at a later time. Those arrangements, when complete, will be announced by the family in both newspaper print and online.