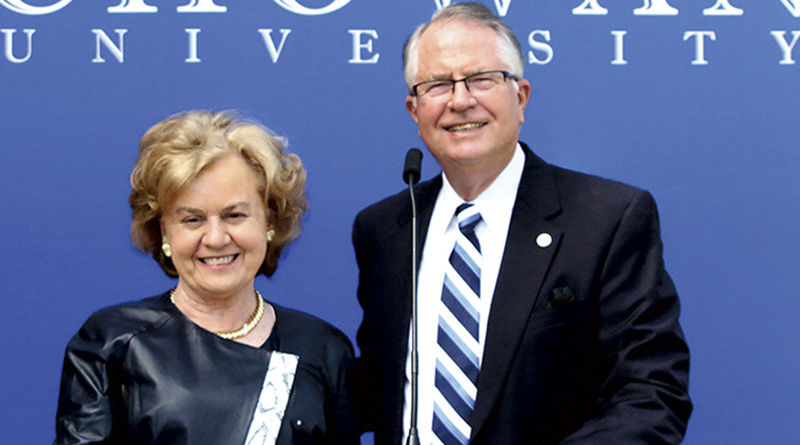 Dr. Chris White – shown with his wife, Linda – recently announced his retirement. He served 14 years as President of Chowan University and as its Chancellor for the past three years. Contributed Photo

MURFREESBORO – In 2003, Dr. Chris White and his wife Linda moved to Murfreesboro to orchestrate what would become the renaissance of a small college in dire financial straits, known as Chowan College at the time.

The Whites initially expected their tenure to last one or two years, but during those initial months, something magical happened. They fell in love with Chowan, her students, her mission, and her place in Christian higher education.

Chowan became their passion and from that point forward it led to one of the most miraculous transformations in higher education during those years.

Now, 17 years later, Dr. and Mrs. White are ready to move to the next stage of their life – retirement.

Dr. White, in a recent message to the Chowan University community, announced his retirement as Chancellor of the University effective May 31.

In his message, he shared that it was “with a mixture of happiness and sadness that Linda and I announce my retirement” and continued that he “would have preferred to have made [the] announcement in person. However, the coronavirus pandemic has upset all our lives by banning large meetings. Please know that my retirement plans have been underway for a long time and are not related to the pandemic. Now is simply the best time for our lives, stress levels, health, and future plans.”

White credits Chowan’s renaissance to having a committed senior staff, almost all of which served alongside him during this critical period in the university’s history. A dedicated faculty and staff followed his lead and together accomplished what was thought by many to be impossible.

In 2017, White announced his transition to becoming the first-ever chancellor at Chowan University, and Kirk E. Peterson was named the twenty-third president in 2018. White first hired Peterson at Chowan in 2004 as a member of the faculty, then in 2018 the Board of Trustees and Dr. White brought him and his family back home as he was named president.

Dr. Peterson shared his heartfelt “appreciation for [Dr. White’s] significant impact on our University during his 17-year tenure” in a message to the Chowan community. He reflected on the first time White brought him to campus and shared how they “walked around campus and he explained and showed me what he was going to accomplish. I loved his vision, and, today, I believe he accomplished every goal.”

Over his 15-year tenure as president at Chowan, White rescued a failing college from closure and transformed it into a thriving regional university with the largest enrollment and strongest financial position in its 170-year history. Some of the most significant accomplishments during White’s tenure include:

Saved the school from closure in 2003 and led it to its strongest position in history.

Built morale and confidence among faculty, staff, and the community that the institution had a positive future.

Transitioned the Chowan from college to university status, as well as changed its nickname from “Braves” to “Hawks.”

Doubled enrollment to tie the highest number in history.

Adopted “Faith in Your Future” as a tagline for admissions and marketing to further emphasize the institution’s focus on Christian values.

Spent and paid for thirty million dollars for on-campus upgrades, including renovations of every building.

Twelve new buildings were constructed, including the nine-building student apartment and suite complex named Whites Crossing by the trustees in honor of Dr. and Mrs. White and their families.

Acquired property of numerous lots and raw acreage expanding the campus to over 400 acres.

Academic programs were enhanced, a graduate school and adult degree completion program were established, and the faculty became arguably the best prepared in the institution’s history.

Redesigning the institution’s relationship with the North Carolina Baptist State Convention and expanding trustee membership to include all Christian denominations.

Successfully orchestrated many project campaigns with the most significant being the preservation of McDowell Columns Hall, the renovation to create the Pond Football Center, and naming two of the residential buildings in Whites Crossing – Jewell Glover Hall and Juanita Pond Hall.

In White’s message to the faculty and staff, he noted that “as I have reflected over the fifteen years I was privileged to serve as your president, all of us working as a team we were able to accomplish amazing things. From the near-death of the school to record enrollments and the strongest financial status in school history was thought to be impossible.”

He concluded his message by sharing a heartfelt thank you to all that were a part of the team. When visitors look around the campus today, appreciating the new buildings and beautiful grounds and the positive attitude of students and staff, they are admiring the results of Dr. and Mrs. White’s years of service.

White often acknowledges those that have been instrumental in his career, with the greatest strength behind his accomplishments being his wife Linda Fleming White. Mrs. White shared that over the years the one constant in their endeavors has been the people and relationships along the way, but Chowan has always been “extra special.” The special relationships at Chowan initiated when faculty and staff came to Boiling Springs to help the couple move to Murfreesboro in 2003 and carried throughout their seventeen years.

A native of Hartwell, Georgia, White earned degrees from Mercer University, The Southern Baptist Theological Seminary, and Emory University. He is also the first United States citizen to be awarded the honorary Doctorate of Musical Arts degree from the prestigious Moscow State Conservatory of Music in Russia.

Dr. White’s professional career began at Elon University in Burlington, NC where he served as a faculty and staff member from 1972-1986. In 1986, he started his presidential career that continued through 2002 at Gardner-Webb University in Boiling Springs, NC.

Dr. White has chaired numerous accreditation teams for the Southern Association of Colleges and Schools during his career in higher education. Community involvement has always been important to him. He is a Rotarian and has worked with the Chamber of Commerce, United Way, Boy Scouts, YMCA, Foundation of the Carolinas, and historical associations. The governor of North Carolina bestowed on him the highest honor – the Order of the Long Leaf Pine. In addition, both Dr. and Mrs. White have been awarded honorary doctorates from Chowan University and the coveted Spirit of Chowan Award.