Gillus, who graduated from Nansemond River High School in Suffolk, VA, is the grandson of Lillie Owens-White of Murfreesboro.

His parents are Amy and Willie Gillus Jr. His father was a record-setting quarterback at Norfolk State University in the mid-1980’s and later served two seasons as the head football coach at his collegiate alma mater. In between, Gillus Jr. coached Surry County (VA) High School to a state football title. 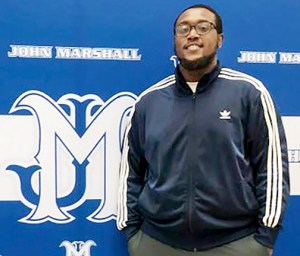 This marks the first head coaching job at any level for Gillus III. He arrived at John Marshall High a year ago, hired as the school’s P.E. teacher.

“This is always been one of my life goals,” Gillus told CBS affiliate WTVR-TV (Richmond, VA) in an interview. “So everything that I’ve been doing up to this point has been to get to where I am now.”

Gillus takes over a John Marshall program that made the state playoffs two straight years for only the third time in school history and finished with a winning record for the first time since 2012.

“We’ll continue the winning tradition,” Gillus expressed. “We were able to go 6-4 last season. We lost in the first round of the playoffs. I don’t think there was anything wrong with the season. I just think we could have made a few different decisions and might have changed a few outcomes of the game.”

John Marshall High School is located in North Richmond, in the historic Ginter Park section of the city. It serves a diverse population of about 950 students.

During his high school career, Gillus played defensive end and tight end at Nansemond River, and served as team captain for the Warriors under coach Tracey Parker. He also played two seasons at right field on the baseball team, which won the District and Regional championships (2010-11 & 2011-12).

Gillus then played four seasons at Morgan State University where the 6’-2”, 275-pounder filled the position of tight end.

Are you a cart returner or cart deserter?

It was a case of behavioral targeting that took a real-life twist. Bored out of my mind with another “Stay-at-Home”... read more