WINDSOR – In an effort to curtail trespass onto Department of Corrections property and contraband transport to the Bertie Correctional Facility, the North Carolina Wildlife Resources Commission has applied a temporary restricted zone along the property that will impact approximately 21 acres of Bertie Game Land.

That restricted zone buffers the east side of the state prison. That wooded area has provided “cover” to those who have attempted to illegally deliver contraband to inmates housed at Bertie Correctional. 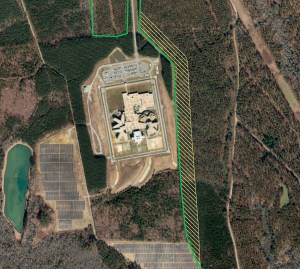 The area shown within the yellow lines is the temporary restricted zone buffer on the east side of the Bertie Correctional Institution, located on NC 308 in Windsor. Map contributed by NC Wildlife Commission

“We have responded to numerous calls in that area,” said Windsor Police Chief Justin Jackson. “We’ve made arrests of individuals after they tossed the contraband over the fence at the prison.”

“They’re very creative is the way they try to camouflage the devices they use to store and deliver these items,” Jackson said. “They’ll use basketballs they’ve cut open, place the items, and then tape it back together. I’ve seen items concealed in just duct tape and covered with grass. In all cases, they just run up to the fence and toss it over.”

That particular area of game lands adjacent to the prison is also a restricted firearms zone.

The temporary restricted zone would not allow anyone from the public to gain entry without a permit.

The Wildlife Commission said this designation is necessary because of the dangers to the health and welfare of the public due to the activities occurring in this area. This measure will allow the Commission’s law enforcement division to better police the area and keep game land users safe.