Mr. Perry was born in Gates County on April 25, 1927 and was the son of the late Benjamin and Fleda Askew Perry. The retired owner and operator of Perry’s Texaco in Sunbury, he served the community providing a full service station with gas, garage work, and inspections, beginning in 1949. The station, still operating today, continues under the ownership of his son. 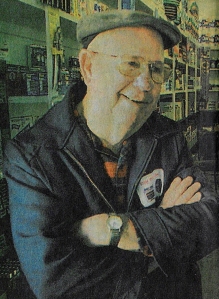 A longtime member of Philadelphia United Methodist Church, he also enjoyed the fellowship provided with his affiliation in the Sunbury Volunteer Fire Dept., the Sunbury Investment Club, and the Ray’s Beach Fishing Club. A veteran of World War II, he served in the United States Marine Corps.

In addition to his parents, he was preceded in death by his sisters, Virginia Harrell, Alma Byrum, and Mabel Wiggins; and by his brother, Cullen Perry.

A private graveside service will be held in the Damascus Christian Church Cemetery in Sunbury.

In lieu of flowers, the family suggests contributions in his memory be made to Philadelphia U.M.C., P.O. Box 148, Sunbury, NC 27979.