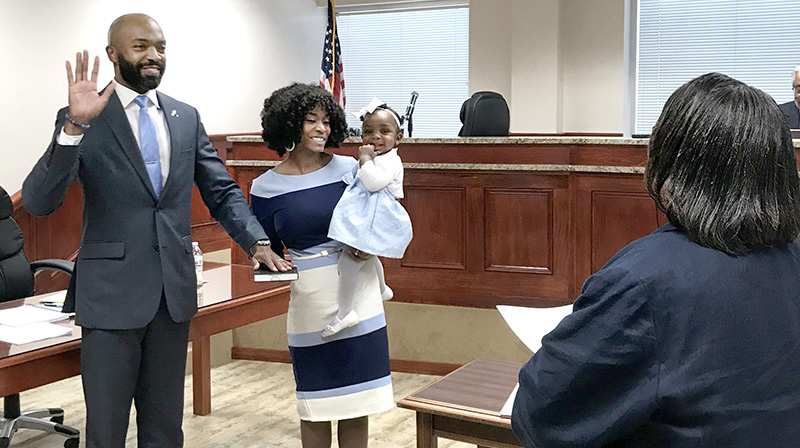 Juan Vaughan II accepts the oath of office as Bertie County Manager while his wife, Austin (holding the couple’s daughter, Ade), holds the Bible. Vaughan, a native of Hertford County where he previously worked as the Assistant County Manager, came to Bertie County in a similar role in June of last year. He was promoted to Interim County Manager in November following the retirement of Scott Sauer. The interim title was removed last month. Photo by Tammy Lee

WINDSOR – Bertie County local government buildings/offices will remain closed to the public despite the governor easing some statewide restrictions effective on Friday of this week.

At their regularly scheduled meeting here Monday, the Bertie Board of Commissioners agreed to a recommendation made by Mitch Cooper, the county’s Emergency Services Director. He told the Commissioners that the county’s number of confirmed COVID-19 cases are increasing. That number stood at 48 on Monday, an increase of four from Friday (May 1). NOTE: Bertie’s cases totaled 58 as of 11 a.m. on Friday, May 8.

“We’re still seeing an upward tick in confirmed and active [COVID-19] cases,” Cooper stated. “We have not yet made it to the point of the governor’s recommendations of a 14-day level number of cases or a decline in the number of cases in our county.”

Cooper added that Bertie was a “high risk county” with over 4,000 citizens over the age of 65 and households exceeding the poverty level are over 3,000.

At the COVID-19 Task Force meeting held Monday morning, Cooper said a lengthy discussion took place about what type of impact would there be on Bertie County based upon the Governor’s planned move to Phase 1 of reopening North Carolina’s economy on May 8.

“If you read what’s in Phase 1, it pretty much does not change the operations that we currently see throughout our county,” Cooper noted. “It [Phase 1] is really more for big retailers – clothing, sporting goods, housewares, etc. A lot of our business facilities here are deemed essential, so we don’t see a lot of changes coming to our area in Phase 1 of the governor’s plan.”

The biggest impact of Phase 1 comes with the 50 percent capacity of shoppers at retail stores and the opening of state parks.

Cooper said Phase 2 would be where local citizens would see more of an impact. According to the governor’s plan, Phase 2 could begin in two to three weeks from now if certain medical thresholds are met. Phase 2 will lift the Stay At Home order with strong encouragement for vulnerable populations to continue staying at home to remain safe. It will allow limited opening of restaurants, bars, fitness centers, personal care services and other businesses that can follow safety protocols, including the potential need to reduce capacity. It will allow gathering at places such as houses of worship and entertainment venues at reduced capacity. It increases the number of people allowed at gatherings, and open public playgrounds.

“The way the plan is written, it may be June 1st before Phase 2 takes affect,” Cooper stressed.

In an effort to “preserve the continuity of local government and protecting county employees,” Cooper recommended the commissioners order the county’s governmental operations remain under existing restrictions. That means the county’s government buildings remain closed to the public with meetings with county officials still offered by appointment only.

“The reason the Task Force is making that recommendation is because of our current trends [an increased number of local COVID-19 cases],” Cooper stated. “If counties around us start to open up and travel, asymptomatic (those with the virus, but show no symptoms) carriers are out and about more often, it puts us at a higher risk with our vulnerable population,” Cooper stressed.

“I have to agree with what Mitch is saying; we keep seeing an uptick [in the number of confirmed COVID-19 cases],” Commissioner John Trent said. “At this time I don’t think we’re in a position to do anything more than what we’ve done up to this point.”

As to when and how the state will reopen its economy, Trent stated he favored a plan to let each individual county make that decision.

“As soon as we reach these phase qualifications, we could open up based on the phases we qualify under,” Trent said. “Right now we’re not at that point because of the uptick in cases here in our county.”

“I agree as well,” chimed in Commission Chairman Ron Wesson. “I see where Windsor’s numbers are high with 30 cases, with a lot of those at the [state] prison and some of those were workers there.”

The remainder of the commissioners were in agreement with Cooper’s suggestion, which prompted a general consensus to keep the county offices closed to the public for now.