EURE, NC – Linda Arlene Eure, age 95, better known to many as “Sugar,” “Miss Sugar,” “Grandma Sugar,” and simply “Mama,” peacefully went to be with Jesus on May 6, 2020. She was a lifelong resident of Eure, North Carolina.

Born to Linda Arlene and Charlie B. Eure on September 27, 1924, she was one of four other siblings—predeceased brothers, Hunter and John, and predeceased sister, Mecia; and surviving sister, Lillian “Sissy” Taylor. She never knew her birth mother, who died three weeks after bringing her into the world, thus as an infant she was lovingly raised by her aunt, Mrs. Carrie Sawyer and her husband Charlie. Baby Linda was the special little sister among the older Sawyer children — Zoe, Curtis, Darcy and Clarence. 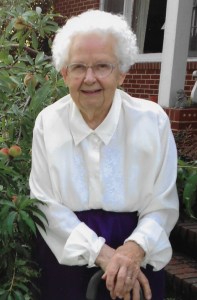 She attended Eure School and graduated at 16 years old from Gatesville High School in 1941. She continued her education at Chowan College until World War II forced its closure. At that time she went to work in Norfolk, VA assisting in the War effort.

In 1944, “Sugar” married Henry D. Eure, a handsome young sailor, a hometown boy, serving his country in the US Navy during World War II in the Pacific Theatre. They went on to raise and educate four children and become an integral part of the Eure community. Sugar and Henry owned and operated a country store in the heart of Eure, which was a gathering place for young and old. Many a child grew up around the candy counter listening to tales being told and receiving much love and care from both Henry and Sugar. Sugar’s life revolved around Eure Baptist Church well into her 90’s – Sunday school teacher, missions, socials, Christmas Eve night, Bible School, etc.

Sugar and Henry’s home – in the center of Eure – was a haven of hospitality. Nothing delighted her more than to have a houseful of people, all ages, eating at her table, congregating in the kitchen, dancing in the living room, playing basketball and croquet in the yard, hosting sleepovers spreading across the living room floor or just shelling beans with dishpan in lap. Being around people was her greatest joy, and for her visitors the reward was like none other for having had the experience of sharing her company for a short while or hours. Being quite a historian of her time, many of her visits would interestingly leave one with a wealth of knowledge about old times in Eure, who was “kin” to whom, life during World War II or maybe just sharing a favorite recipe.

She always looked forward to being a guest speaker at the Gates County High School History Class and many students interviewed her for their history project and marveled at the bounty of knowledge “Miss Sugar” shared.

She is survived by her children, Dr. Linda Eure of Chesapeake, VA, Brinda (Billy) Felton, Henry C. “Bud” (Fleda) Eure, and Nancy (Ray) Campbell, all of Eure, NC; as well as five grandchildren, Danny (Suzanne), Amy, Martha (Joseph), Elizabeth (Yorick), and Charlie; and three great grandchildren, Tommy, John and Hunter, and another due to be born in June. Additionally, she was loved by several nieces and nephews and many friends who were like family to her.

A graveside service will be held Saturday, May 9 at 2:00 p.m. in the Eure Baptist Church Cemetery, conducted by her pastor, The Rev. Dr. Wayne Proctor.

Due to the restrictions and recommendations placed by the CDC in response to the Coronavirus, there will not be a formal visitation. For those who wish, you may join the children and their families at their respective homes.

Flowers are welcomed, or contributions in her memory may be made to Eure Baptist Church, in care of Debra Vaughan, 21 Fort Island Road, Eure, NC 27935.