MEBANE, NC – Marie Smith Harrell, 99, widow of William Carey Harrell, died peacefully at home on Sunday, May 3, 2020. She was born in Mebane on June 29, 1920 to June Nelson Smith and Annie Sartin Smith.

Marie graduated from Mebane High School and attended East Carolina Teachers College. While practice teaching in Farmville, NC, she met her future husband who was teaching and coaching there. After graduation, she taught home economics at Pikeville, NC. When Carey returned from the war in Europe, they were married on November 4, 1944. After his release from service in 1945, they lived and taught in Farmville where their first son was born. 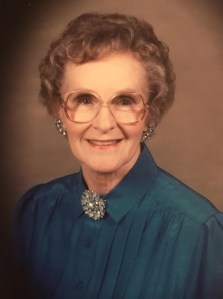 In 1947 the Harrells moved to Gatesville, NC where Carey became Superintendent of Schools in Gates County, his home county. Three more sons were born there. Later, Marie worked as a sales representative for World Book Encyclopedia, rising to Senior District Manager. She then taught kindergarten and special education in the Gates County Schools until she and Carey retired in 1974. They enjoyed retirement and traveled extensively until his death in 1986. Marie continued to live in Gatesville, remaining a faithful member of Gatesville Baptist Church.

In 2014, Marie moved to her childhood home in Mebane and lived there until her death with her beloved sister, Betty Jean Smith.

In addition to her parents and husband, Marie was predeceased by a brother, Melvin R. Smith, and a son, William Carey Harrell, Jr.

A memorial service will be held at a later date in Gatesville, NC. Memorials may be made to Gatesville Baptist Church, PO Box 167, Gatesville, NC 27938, or Mebane United Methodist Church, 200 S 4th St, Mebane, NC 27302.