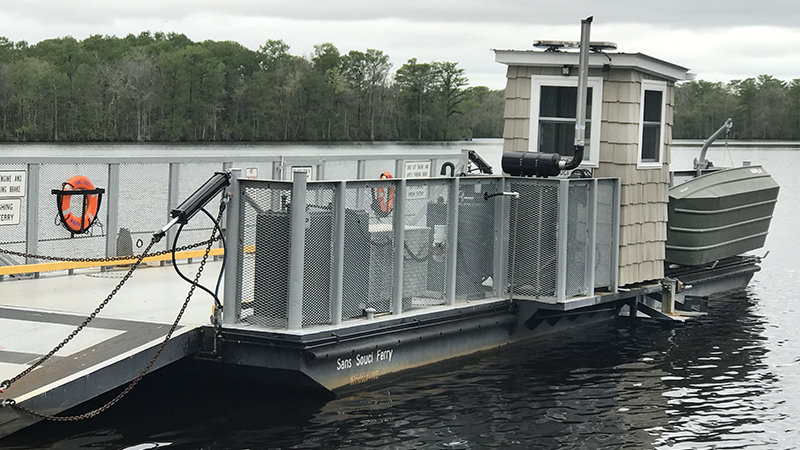 Sans Souci Ferry has carried vehicles across the Cashie River since the 1930’s. NCDOT has announced plans to close the ferry next month. Photo by Michelle Leicester / Bertie Ledger-Advance

WINDSOR – “We need to keep this ferry afloat.”

Those were the words of Ronald “Ron” Wesson, chairman of the Bertie County Board of Commissioners, as he addressed a plan recently announced by the North Carolina Department of Transportation to close Sans Souci Ferry next month.

That historic, cable-drawn ferry, in operation since the 1930’s, is one of only three of its kind left in the state. It shuttles vehicles for free across the Cashie River.

Another local cable-drawn ferry, Parkers in Hertford County, is also slated to cease operations in mid-June.

The Bertie Commissioners discussed the future of Sans Souci Ferry as part of their scheduled meeting on Monday evening. There, Steve Biggs, the county’s Economic Development Director, gave the board members an update on what options may be available to keep the ferry in operation.

“This thing [planned closure of the ferry] has upset a lot of people,” said Biggs. “It’s tourism for us….a lot of people visit lighthouses, and a lot visit and travel on different ferries.”

As far as what options are available, Biggs said he spoke with Jerry Jennings, Division Engineer for NCDOT’s Division One.

“Jerry felt really good about us working towards a reimbursable agreement,” Biggs said. “They do not have the funds to keep it going.”

Biggs added that Jennings suggested a MOU (Memorandum of Understanding), which would allow Bertie County to directly contract the operations of the ferry.

That contract, currently funded by NCDOT, is $64,374.96 and paid annually to Hunt’s Enterprises of Ahoskie. NCDOT additionally pays, on average, approximately $20,000 to cover the annual costs of maintenance, fuel, etc. for Sans Souci Ferry.

“Jerry said DOT would work with us in any way they possibly could to keep it [the ferry] running if we could identify funds,” Biggs reported.

“That’s the time of the year when the tourists are more than likely here in our county,” Biggs stressed, revealing the number of days the ferry was closed during the months of July (15 days), August (24 days), September (24 days), and October (28 days).

As for the most current info, the NCDOT spreadsheet noted that the ferry was out of operation for 15 of the first 25 days of April, 2020

“It says on the spreadsheet that it’s closed due to high water,” Biggs said. “So I asked if that was due to water over the unpaved portion of Sans Souci Road or was it that the water in the river was too high? The response was ‘it was too difficult to say’.”

In an effort to locate resources to generate the roughly $85,000 needed annually to maintain the ferry’s operation, Biggs said if Bertie could locate the money to cover the costs of operating the ferry, he asked NCDOT officials if the county could offset some of those expenses by locating a concession stand, kayak dock, or camping spots on the property.

“I was told that these requests would probably not be permitted; the area the state owns there is very small and it would not accommodate what we were looking to do,” Biggs said. “So we’re still looking for opportunities to keep this ferry afloat, some how, some way.”

Wesson asked Biggs if NCDOT gave him any indication if they would eventually re-open the ferry and when.

“To be quite frank with you, from the conversations I’ve had with several people, I think it will be three or four years,” Biggs answered.

Wesson said if he understood what he was hearing from state leaders in Raleigh, there was a plan to give NCDOT additional money.

“I’m wondering if they [NCDOT] will receive money to cover things like this [continued operation of the ferry],” Wesson remarked.

“I hate to say it, but DOT was broke long before this,” Biggs said.

Wesson implored Biggs to search for funds, to include possible grants, to keep the ferry in operation.

“I truly believe we need to explore all options,” said Commissioner Ernestine Bazemore. “We need to keep the ferry open. It’s one of our main tourist attractions.”

“It’s just a matter of finding the dollars,” Wesson said. “We don’t need to leave any stone unturned.”

Later in the meeting, the board approved a resolution that encouraged the state to find the funding needed to maintain the operation of Sans Souci Ferry.

NCDOT said the last day of operation will be June 13.