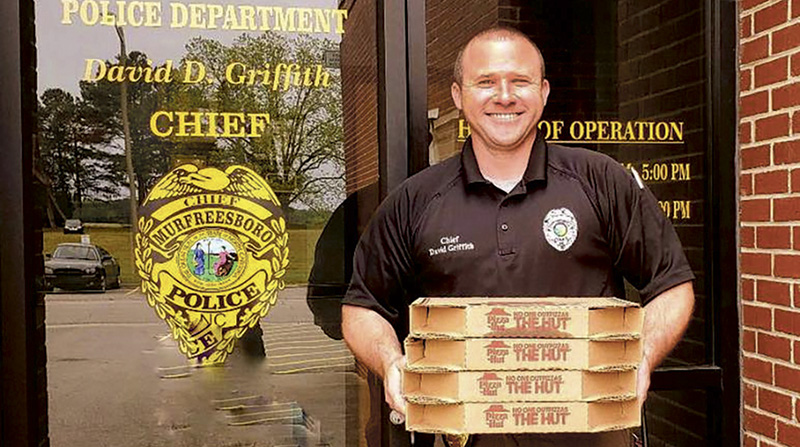 For the last few weeks, Pizza Hut of Ahoskie has donated pizzas to officers at the Murfreesboro Police Department through an effort organized by Alice Warren. MPD Chief David Griffith is shown here accepting the latest delivery. Contributed Photo

MURFREESBORO – Police work through all kinds of conditions, especially during a global pandemic. But even police officers need to eat, and recently, they’ve been getting some help from the community on that front.

Alice Warren, a Murfreesboro native and the mother of a police officer herself, has been helping coordinate meal donations for the Murfreesboro Police Department since the beginning of April.

“She’s just been a godsend, in my opinion,” said Murfreesboro Police Chief David Griffith. “For her to step up like she has, it’s just been awesome. I can’t thank her enough.”

“We’re working a 12-hour shift or an 8-hour shift, and we use our local restaurants often,” Griffith explained, noting that it’s been more difficult when those restaurants aren’t open. “It’s been hard on us too.”

Warren said she simply wanted to help out the police department because she understood what they have to go through.

“I know how hard these men and women work,” explained Warren. “It’s stressful on a good day, and with this virus, it’s even more stressful. Murfreesboro didn’t have many restaurants open, so I thought it would be a good time for us to show our appreciation.”

“This is one less thing they have to worry about or plan for,” she continued.

With help from friends and local restaurants and others in the community, Warren has organized a variety of meals for the officers to share. The meals are also offered to the employees of the Town Hall, which is housed in the same building as the police department.

Those meals have included a variety of things like homemade barbecue, chicken salad, pasta salad, coleslaw, cakes, baked goods, and more. Once a week, Warren also brings pizzas from Pizza Hut in Ahoskie.

“She knows police officers aren’t really prepared for stuff like this. We don’t have a big kitchen. So she’s also brought us plastic plates and plastic silverware, so we didn’t have to eat with our hands,” the police chief added with a laugh. “She’s just been really good to us.”

If others want to help provide meals, Warren said the best way to get in touch with her is by email at ajwarren222@yahoo.com. But she also simply encouraged people to write thank you notes to the police station as another way the community could show their support and appreciation.

She mentioned, for example, a car accident she was in a few months ago. Police officers were some of the first people on the scene.

“They were there and ready to help me. So why not help them,” she said.

Chief Griffith acknowledged that it’s been an adjustment to continue working during the pandemic, but law enforcement activities haven’t stopped. He said the department has also received some donations of sanitizer and gloves and other kinds of support from the local community as well.

“We’d like to thank all the people who support us. Everybody’s in this time of need together,” he concluded.