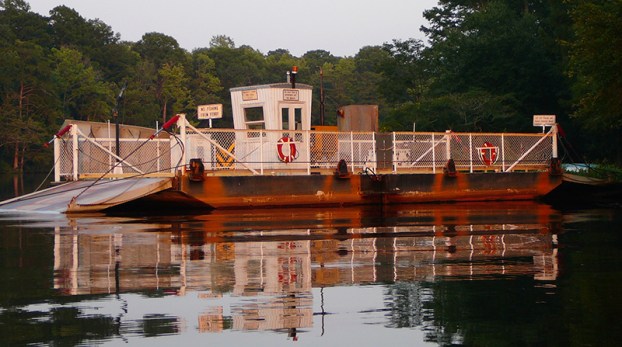 This photo, taken in 2013, shows Parker’s Ferry waiting to shuttle a vehicle across the Meherrin River. Parker’s Ferry and Sans Souci Ferry in Bertie County are scheduled to end operations on June 13, according to the NC Department of Transportation. Photo by J. Styons

End of the ride?

Is the end near for two of the last three cable ferries remaining in the state?

The North Carolina Department of Transportation has announced plans to cancel the operational contracts for both Parker’s Ferry in Hertford County and Sans Souci Ferry in Bertie County effective June 13.

These ferries have shuttled vehicles across the Meherrin and Cashie rivers respectively since the early 1900’s. However, NCDOT cited budget shortfalls and a small volume of traffic using these ferries as the reason for their decision.

While NCDOT’s Dennis Robertson informed Hertford County officials that, “we hope to put them [ferries] back in service as soon as possible,” the schedule for resumption of service is yet to be determined.

Meanwhile, the Hertford County Board of Commissioners have put an effort in motion to ask NCDOT to reconsider its decision to shut down Parker’s Ferry.

At their scheduled meeting on Monday in Winton, the board unanimously approved a resolution that formally requested NCDOT find the funds necessary to maintain the ferry’s operations.

In that resolution, the commissioners said the continued operation of Parker’s Ferry is beneficial locally and in the region, and that the loss of operational funds will have an adverse effect on the local economy beyond the impact left in the wake of the COVID-19 pandemic.

As to the latter issue, the commissioners pointed to the loss of local jobs and income.

The R-C News-Herald learned that both ferries operate under a contract awarded by NCDOT to Hunt’s Enterprises of Ahoskie. Those contracts are worth $64,374.96 annually for each ferry.

Both ferries recently underwent major overhauls at a cost of $125,000 each. According to NCDOT, these overhauls are performed, on average, every 15 years and include hull repair, paint, repowering, safety upfits, and other general repair items.

“The intent was that it be transported sooner, but due to higher priorities for the Ferry Division tug and crew, it has yet to be returned,” stated Tim Hass, Communications Officer for NCDOT Division One.

It is not known whether or not Parker’s Ferry will be returning to its port along the Meherrin River and placed back in operation prior to June 13.

Hass added that NCDOT is currently facing a $300 million budget shortfall for FY20 due to a significant drop in revenues (Motor Fuels Tax, Highway Use Tax, and DMV fees). He said that shortfall is “mostly due to a precipitous drop in traffic related to COVID-19 issues.”

According to Hass, Parker’s Ferry, when in operation, carries approximately 12 vehicles per day across the Meherrin River. The Sans Souci Ferry, he said, shuttles about seven vehicles a day across the Cashie River.

Both ferries can carry a maximum of two vehicles. They are guided by a steel cable that is stretched loosely across the river. The cable is secured on each side of the river by steel posts and as the ferry crosses the river, the force of the boat, with the help of rollers on the side of the boat, pulls the normally submerged cable out of the water. The cable is permanently secured to the ferry and allows for the boat to not stray off course in normal river currents.

Neither ferry charges a fee.

Outbreaks of the novel coronavirus (COVID-19) are on the rise in the Roanoke-Chowan area due to a spike in the... read more