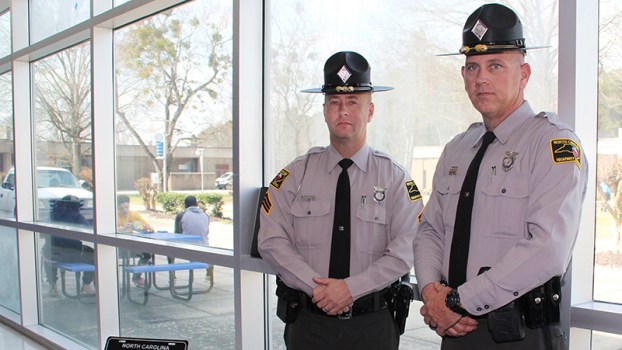 AHOSKIE – Those in search of a well-paying career may want to consider joining the ranks of the North Carolina State Highway Patrol.

Recently, Patrol Trooper D.R. Pugh was joined by local Troop A / District II Sgt. K.R. Briggs at a recruiting effort held in the cafeteria of the Student Center on the campus of Roanoke-Chowan Community College.

“We typically find the ages we’re looking to recruit at community colleges and on military bases,” Pugh explained, adding that the age range to initially join the Patrol is 21-to-39.

Pugh, a native of Hyde County, is a 20-year veteran of the Highway Patrol. He has worked the last five years as the Troop A Recruiter.

Currently, the Highway Patrol is seeking applicants to enter its next Training Academy, located in Garner. Those that qualify and are accepted can undergo two types of training – the long school is 27 weeks for those who are not already BLET (Basic Law Enforcement Training) certified. The short school is 12 weeks (for those with BLET certification).

“The next short school begins in August and we’ll have a long school beginning in December,” Pugh said.

He said there is no limit on the number of trainees for the short school. The capacity for the long school is 85. The current recruitment effort is for those two schools.

“The good news is that at either school, the trainee is paid at a level of a starting Trooper ($37,323 annually),” Pugh said. “We pay you to go to school. Then, upon graduation, they receive a pay increase to $46,228 annually. After six years with the Patrol, that salary increases to $67,453 annually.

“These are all newly increased pay grades as approved by the [North Carolina] General Assembly. Those starting salaries and the ensuing increases were put into place to help us with recruiting new Troopers and retaining them in our workforce down the road,” Pugh added.

He said there are currently 200 openings in the Patrol statewide.

“Plus we offer great benefits, to include retirement, if you join us before July 1, 2021,” Pugh noted.

JACKSON – The Northampton County Commissioners approved agreements at their regular meeting here Monday, April 20 which will allow the... read more