Due to the global Coronavirus outbreak, a graveside service will be held at 11 am on Tuesday, April 21, 2020 in Ahoskie Cemetery. A memorial service will be scheduled when permitted.

Bob was born in Ahoskie on May 29, 1923, the son of Troy and Lena Newsome. Growing up in First Baptist Church and on the family farm, he learned the values that sustained him through a long and fruitful life. 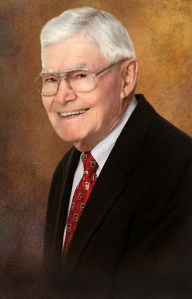 He attended Wake Forest College (now university) until he was called into the U.S. Army during World War II. He and his lifelong friend, Fred Lowe, enlisted together and served shoulder to shoulder throughout their tour of duty with the 3014th Ordnance Company stateside and in England and France.

Bob was specially trained for the Allies’ mission to retrofit thousands of ordinary Army vehicles to make them amphibious. Using a newly developed, secret compound, he trained other soldiers to waterproof vehicles, enabling thousands to disembark from landing craft amid rough seas. The historic operation on the beaches at Normandy ensured the success of the D-Day invasion.

Once the war was won, Bob returned home to civilian life and soon met a young college girl in Raleigh, Dorothy (Dot) Phelps of Hurdle Mills. The two married in 1947 and later welcomed into their life two daughters, six grandchildren and three great grandchildren. They were married 72 amazing years, inspiring family and friends with their shared mission of caring for others.

Bob’s career spanned decades, first with Ahoskie Wholesale Company where he was a partner and president. Upon retirement, he joined Ahoskie Fish and Produce. A few years later, he retired again to join the State Employees Credit Union, where he worked til age 90 and also served as a volunteer.

He was happiest when serving God, his family and his hometown, primarily as part of First Baptist Church as deacon, usher, Sunday School teacher and member of numerous committees. He enjoyed many fulfilling years with Ahoskie Kiwanis Club, where he was president and took part in many successful projects to better the community.

Bob was an enthusiastic partner with Dot in rearing their daughters. Later, the two fully embraced their roles as “grands,” crisscrossing the state to attend sports, theatre and music events, even into their 90s. They never missed a high school or college graduation.

In addition to his parents, Bob was preceded in death by his brothers, Troy W. Newsome and Alvin C. Newsome.

Garrett-Sykes Funeral Service – Ahoskie Chapel is handling the arrangements for the Newsome family and online condolences can be directed to the family by visiting www.garrettsykesfs.com