AHOSKIE – While the 2020 American Legion Senior and Junior Baseball season has been canceled due to safety concerns with the COVID-19 virus, local coaches are seeking alternative ways for the popular game to continue.

Ahoskie Post 102 coach David Ellis said officials with the North Carolina American Legion met earlier this week and voted unanimously to cancel all youth programs for the 2020 spring and summer. 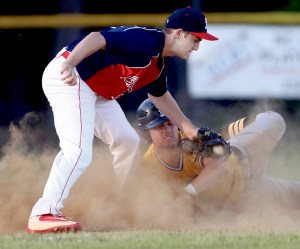 Ahoskie’s Parker Bradley (left) applies the tag to a Windsor base runner in a Junior American Legion baseball game from the 2019 season. File Photo by William Anthony

“We were really looking forward to the upcoming Legion baseball season,” said Ellis, who was moving up from Post 102’s Junior team to coach the Senior team this year with Aaron Hoggard taking the reins of the Junior team.

“Both the NC Legion Department and Legion National Headquarters felt like it was in the best interest of safety to cancel the season. I hate it for the boys, they lost the whole season of baseball only being able to play a handful of high school games before their season was canceled,” Ellis added.

However, all is apparently not lost.

Later this week, Ellis announced that the majority of the Legion Area 1 coaches have met and formed an Independent Summer League for the senior team ages, one that hinges on if the COVID-19 pandemic is deemed under control and the Governor eases restrictions.

“If that happens, we will not be affiliated with any American Legion Post, only abiding by the rule book and age limits,” Ellis noted. “As of now Garner, Pitt County, Farmville, Kinston, Cary, Ahoskie, Wilson and Wayne County are on board. We are aiming for a 10-team league. There will be an All-Star Game on July 30t and the championship is scheduled for Aug. 7 with those games played at Campbell University.

“Nothing has been worked out for the Junior age group, but I understand something is being discussed. Hopefully the COVID-19 will ease up and in a couple months we will be playing baseball,” Ellis concluded.

JACKSON – Confirmed cases of COVID-19 stand at 70 in Northampton County and now include one death. On Friday, Andy... read more