WILSON – There was one thing for sure about former basketball coach Bob Burke during his tenure at what was then Chowan College.

Whether it was his high-energy approach to coaching or his rapid-fire dialogue at the home of a recruit – allowing him to snag some of the sport’s top junior college talent to a tiny school in Murfreesboro – Burke did it with style; in life and sometimes with his language.

Burke died at his home here at age 74 on Saturday after enduring a number of health issues the past 13 years or so. According to his son, Rob, he did not succumb to coronavirus.

“When I did the PA (public address) announcing, I had a front row seat just a few feet away from Bob every game,” said Northampton native and Chowan Hall-of-Famer Gattis Hodges, the radio/internet voice of Chowan athletics. “One of the things I had to learn was the on-off switch on the microphone because he was only 10 feet away and some of what he’d say in the huddle couldn’t be repeated.”

“He was extremely demanding and as tough as nails,” remembers Bob Daggett, a fellow Staten Island, NY native like Burke who was recruited to come south and play for him. “But once practices or games were over, he was a great guy that would do anything for you.” 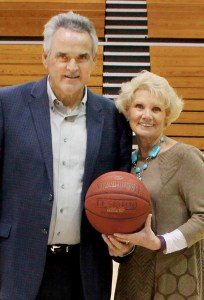 Legendary basketball coach Bob Burke is joined by his wife, Jane, just prior to the January 2016 dedication of “Bob Burke Court” at Chowan University. File Photo

Burke played college hoops at Campbell University (ne: College) before eventually becoming a college hoops coach that would eventually lead him to the Chowan job in 1980. When he became head coach it was a junior college, but eventually it became a four-year university that played NCAA Division III and now Division II.

Burke’s career at Chowan spanned five decades. He won 419 games in 22 years – including 12 consecutive 20-win seasons – and boasted a 419-217 record. He took what were then known as the Chowan Braves to three JUCO Sweet 16s, including one Final Four. In 2000 he was inducted into the Chowan University Hall of Fame. He left as the third winningest active coach in North Carolina history behind only Mike Krzyzewski (Duke) and Jerry Steele (High Point).

“If you played for Bob, you got a Ph. D in mental toughness,” said Matt White Jr., another Staten Island native who played for Burke at Chowan. “Really hard on you on the court, and the nicest guy in the world off it.”

Following his tenure in Murfreesboro, Burke went onto become an assistant coach at the University of Hawaii, as well as with the pro basketball NBA Portland Trailblazers under McMillan, who is now coach of the Indiana Pacers and had kept in touch with Burke over the years. After suffering a heart attack in 2007, Burke stopped coaching full time.

“Not only did he promote his players, he promoted junior college basketball in general,” continued Hodges. “He loved people and there are so many high school coaches who will tell you they learned so much under him.”

“For years now, I’ve had the pleasure of listening to some of Coach Burke’s former players be inducted in the Hall of Fame,” said current Chowan Director of Athletics Pat Mashuda. “To a person they all credit Coach Burke for being tough and helping them become the person they are today. As a coach we all want to win games, but in the end we all want to have a positive impact on the lives of our student-athletes. Coach Burke’s influence will live on for generations, not only as a basketball coach but a leader of young men.”

Legend has it that when the late fellow Hall-of-Famer Jim Garrison, Chowan’s athletic director at the time, interviewed him for the job in 1980, Burke peered around a then-empty Helms Center and mused to Garrison.

“I can win here,” he’s said to have said with a sly smile. But that meant recruiting good players.

And Burke didn’t just have good players, he had great players.

“That was such a fun time, those junior college days,” reminded Hodges. “We had teams that could have won Division-I games.”

Burke and his wife, Jane – who became a successful teacher in the community and experienced professional success in the education field becoming a well-respected school administrator in several eastern North Carolina school districts – had two children.

Rob Burke, Bob’s son who played at Hertford County High and later for his father, began sitting on the Chowan bench at age 4. The younger Burke went on to become a college assistant and most recently interim head coach at UNC-Wilmington.

“He’d tell me he’s forgotten more about basketball than I know,” Rob once joked of his dad.

“I feel extremely lucky to have gotten to know Coach Burke and his family while a student-athlete here at Chowan and later as an employee and professional,” recalled Deputy Athletic Director and Senior Women’s Administrator Meredith Long. “Having been around sports my entire life, I’ve been around many coaches but none as captivating as him. He had an uncanny ability to reach deep into a player’s guts and pull the very best of them every single day. He left us all with many great memories, as only a legend could.”

Burke says he was always proud of what he called “Chowan sweat,” by how hard his players worked. To maintain discipline, he had an exercise called ‘The Snake’: 5:30 a.m. runs in the football stadium for any players who broke team rules.

In January of 2016, Chowan named the court he once ruled after him. Imprinted on the court in front of the home bench painted bright blue on the polished floor is his trademarked footprint. Burke’s tenacious and often fiery personality was known to entertain the crowds that filled the seats of the Helms Center and make any assigned referee question his whistle call. Burke’s foot stomp would echo loudly across the beams of the Helms Center on any given game day whether in protest of an official’s call or to motivate his players to run the offense that he knew would win the game.

After the Chowan naming announcement, Jane Burke listened as her husband make call after call to his former players, telling them the news.

“It was tough love Bob gave his players,” she remembers. “But Bob would do anything for his players and I’ve heard many say, ‘Coach Burke, I would not have made it if not for you.’”

Bob Burke’s obituary is on page 6 of today’s edition.