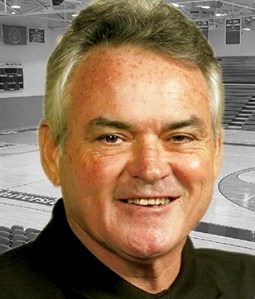 Bob was preceded in death by his parents, Gerald and Josephine Burke; his sisters, Marion Shea, Margaret Allan, and Anne Jankunis and brothers, Edward Brochart and Stephen Burke. Bob was also predeceased by a special niece and nephew, Susan Rindos and Thomas Carr.

Upon graduation from Campbell he began his coaching career at Wallace Rose Hill High School. The Staten Island, New York native continued to patrol the sidelines of North Carolina eventually coaching at every level of the game of basketball.

But his most memorable years were spent at then Chowan College where Burke compiled a 419-217 coaching record and led the then Braves to three NJCAA tournaments, two sweet 16 appearance and one Final Four appearance along with 12 consecutive 20-plus win seasons and nine Coach of the Year awards.

After enjoying 22 years of great success at then Chowan College, he went on to serve as an assistant coach at the University of Hawaii and with NBA’s Portland Trailblazers. Upon his retirement, he continued to assist many coaches and players, including his daughter, Ashlyn who coached at the junior college level.

Until his final days, Bob served as mentor and confidant to his son, Rob, who also follows in his father’s footsteps as a college basketball coach.

In recognition of his service and stewardship, Bob was inducted in Chowan College’s Hall of Fame in 2000, he left as the third winningest active coach in North Carolina history behind Mike Kryzewski (Duke) and Jerry Steele (High Point), Campbell University Athletic Hall of Fame, George Whitfield Baseball Hall of Fame, 2008 Palm Springs Distinguished Speaker Award. Among many of his achievements one of his proudest is the naming of the “Bob Burke Court” at Chowan University.

Due to COVID-19, a private graveside service will be held for the family. A public memorial service celebrating Coach Burke’s life will be held at a later date.

Condolences directed to Joyner’s Funeral Home and Crematory at www.joyners.net.